Vulcan Materials Company (NYSE:VMC) was in 53 hedge funds’ portfolios at the end of September. VMC investors should pay attention to an increase in enthusiasm from smart money of late. There were 52 hedge funds in our database with VMC positions at the end of the previous quarter. Our calculations also showed that VMC isn’t among the 30 most popular stocks among hedge funds (see the video below).

To the average investor there are a lot of methods shareholders use to analyze publicly traded companies. Two of the most under-the-radar methods are hedge fund and insider trading sentiment. Our researchers have shown that, historically, those who follow the top picks of the best hedge fund managers can outclass their index-focused peers by a very impressive margin (see the details here).

At the end of the third quarter, a total of 53 of the hedge funds tracked by Insider Monkey were bullish on this stock, a change of 2% from the second quarter of 2019. The graph below displays the number of hedge funds with bullish position in VMC over the last 17 quarters. With hedge funds’ capital changing hands, there exists a few key hedge fund managers who were increasing their stakes meaningfully (or already accumulated large positions). 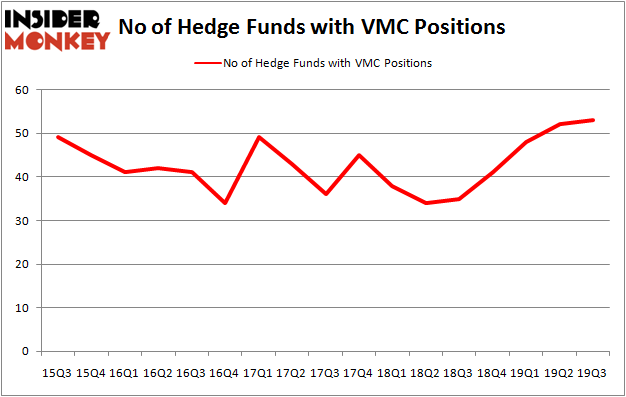 When looking at the institutional investors followed by Insider Monkey, John Armitage’s Egerton Capital Limited has the biggest position in Vulcan Materials Company (NYSE:VMC), worth close to $535.8 million, amounting to 3.8% of its total 13F portfolio. Coming in second is Adage Capital Management, led by Phill Gross and Robert Atchinson, holding a $208.9 million position; the fund has 0.5% of its 13F portfolio invested in the stock. Remaining hedge funds and institutional investors that are bullish contain Ricky Sandler’s Eminence Capital, Panayotis Takis Sparaggis’s Alkeon Capital Management and Andrew Immerman and Jeremy Schiffman’s Palestra Capital Management. In terms of the portfolio weights assigned to each position BlueDrive Global Investors allocated the biggest weight to Vulcan Materials Company (NYSE:VMC), around 9.69% of its portfolio. Palestra Capital Management is also relatively very bullish on the stock, setting aside 4.4 percent of its 13F equity portfolio to VMC.

As aggregate interest increased, key money managers have been driving this bullishness. Marshall Wace, managed by Paul Marshall and Ian Wace, initiated the most outsized position in Vulcan Materials Company (NYSE:VMC). Marshall Wace had $13.5 million invested in the company at the end of the quarter. Israel Englander’s Millennium Management also made a $6 million investment in the stock during the quarter. The other funds with brand new VMC positions are Paul Tudor Jones’s Tudor Investment Corp, Louis Bacon’s Moore Global Investments, and Michael Gelband’s ExodusPoint Capital.

As you can see these stocks had an average of 29.5 hedge funds with bullish positions and the average amount invested in these stocks was $1587 million. That figure was $1965 million in VMC’s case. Palo Alto Networks Inc (NYSE:PANW) is the most popular stock in this table. On the other hand Imperial Oil Limited (NYSE:IMO) is the least popular one with only 11 bullish hedge fund positions. Compared to these stocks Vulcan Materials Company (NYSE:VMC) is more popular among hedge funds. Our calculations showed that top 20 most popular stocks among hedge funds returned 34.7% in 2019 through November 22nd and outperformed the S&P 500 ETF (SPY) by 8.5 percentage points. Unfortunately VMC wasn’t nearly as popular as these 20 stocks and hedge funds that were betting on VMC were disappointed as the stock returned -8.2% during the fourth quarter (through 11/22) and underperformed the market. If you are interested in investing in large cap stocks with huge upside potential, you should check out the top 20 most popular stocks among hedge funds as 70 percent of these stocks already outperformed the market in Q4.