Vector Group Ltd (NYSE:VGR) shareholders have witnessed an increase in enthusiasm from smart money in recent months. VGR was in 20 hedge funds’ portfolios at the end of the fourth quarter of 2018. There were 18 hedge funds in our database with VGR holdings at the end of the previous quarter. Our calculations also showed that VGR isn’t among the 30 most popular stocks among hedge funds.

How have hedgies been trading Vector Group Ltd (NYSE:VGR)? 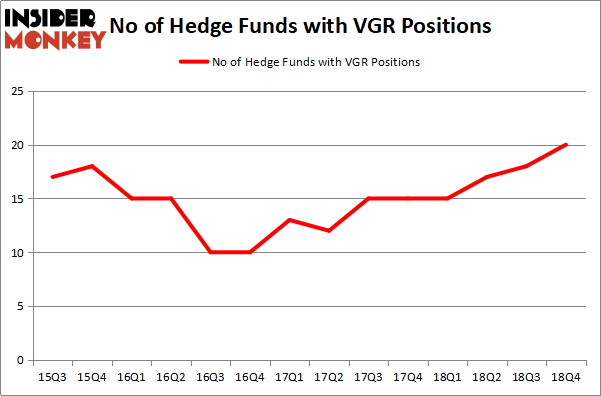 Among these funds, Renaissance Technologies held the most valuable stake in Vector Group Ltd (NYSE:VGR), which was worth $95 million at the end of the fourth quarter. On the second spot was Millennium Management which amassed $18.6 million worth of shares. Moreover, GLG Partners, Two Sigma Advisors, and Gotham Asset Management were also bullish on Vector Group Ltd (NYSE:VGR), allocating a large percentage of their portfolios to this stock.

As one would reasonably expect, key hedge funds have jumped into Vector Group Ltd (NYSE:VGR) headfirst. Citadel Investment Group, managed by Ken Griffin, created the most valuable position in Vector Group Ltd (NYSE:VGR). Citadel Investment Group had $10.3 million invested in the company at the end of the quarter. Gavin Saitowitz and Cisco J. del Valle’s Springbok Capital also made a $3.2 million investment in the stock during the quarter. The other funds with new positions in the stock are Peter Muller’s PDT Partners, Parsa Kiai’s Steamboat Capital Partners, and Michael Gelband’s ExodusPoint Capital.