How do we determine whether United Technologies Corporation (NYSE:UTX) makes for a good investment at the moment? We analyze the sentiment of a select group of the very best investors in the world, who spend immense amounts of time and resources studying companies. They may not always be right (no one is), but data shows that their consensus long positions have historically outperformed the market when we adjust for known risk factors.

United Technologies Corporation (NYSE:UTX) has seen an increase in activity from the world’s largest hedge funds of late. UTX was in 68 hedge funds’ portfolios at the end of the third quarter of 2019. There were 65 hedge funds in our database with UTX positions at the end of the previous quarter. Our calculations also showed that UTX isn’t among the 30 most popular stocks among hedge funds (see the video below).

Heading into the fourth quarter of 2019, a total of 68 of the hedge funds tracked by Insider Monkey were long this stock, a change of 5% from the second quarter of 2019. By comparison, 59 hedge funds held shares or bullish call options in UTX a year ago. With hedge funds’ positions undergoing their usual ebb and flow, there exists a few key hedge fund managers who were adding to their stakes considerably (or already accumulated large positions). 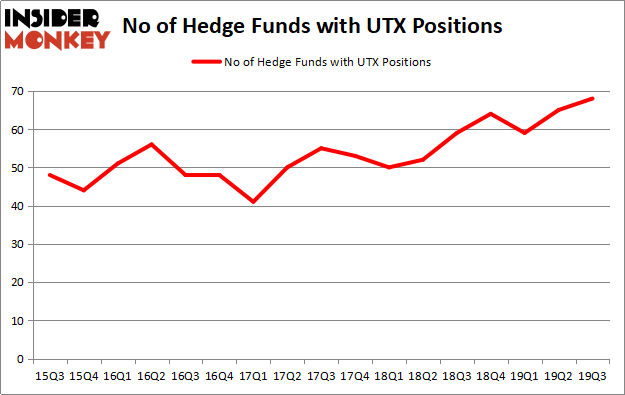 When looking at the institutional investors followed by Insider Monkey, Third Point, managed by Dan Loeb, holds the largest position in United Technologies Corporation (NYSE:UTX). Third Point has a $819.1 million position in the stock, comprising 9.7% of its 13F portfolio. Coming in second is Citadel Investment Group, managed by Ken Griffin, which holds a $729 million position; the fund has 0.3% of its 13F portfolio invested in the stock. Remaining professional money managers that hold long positions contain Ken Fisher’s Fisher Asset Management, Eric W. Mandelblatt and Gaurav Kapadia’s Soroban Capital Partners and Robert Rodriguez and Steven Romick’s First Pacific Advisors. In terms of the portfolio weights assigned to each position Third Point allocated the biggest weight to United Technologies Corporation (NYSE:UTX), around 9.73% of its portfolio. One Fin Capital Management is also relatively very bullish on the stock, earmarking 8.44 percent of its 13F equity portfolio to UTX.

As you can see these stocks had an average of 50.5 hedge funds with bullish positions and the average amount invested in these stocks was $3678 million. That figure was $6458 million in UTX’s case. Netflix, Inc. (NASDAQ:NFLX) is the most popular stock in this table. On the other hand Royal Bank of Canada (NYSE:RY) is the least popular one with only 17 bullish hedge fund positions. United Technologies Corporation (NYSE:UTX) is not the most popular stock in this group but hedge fund interest is still above average. Our calculations showed that top 20 most popular stocks among hedge funds returned 34.7% in 2019 through November 22nd and outperformed the S&P 500 ETF (SPY) by 8.5 percentage points. Hedge funds were also right about betting on UTX as the stock returned 8.7% during the fourth quarter (through 11/22) and outperformed the market. Hedge funds were rewarded for their relative bullishness.