Hedge Funds Have Never Been This Bullish On United Bankshares, Inc. (UBSI)

United Bankshares, Inc. (NASDAQ:UBSI) has experienced an increase in enthusiasm from smart money in recent months. Our calculations also showed that UBSI isn’t among the 30 most popular stocks among hedge funds (view the video below). 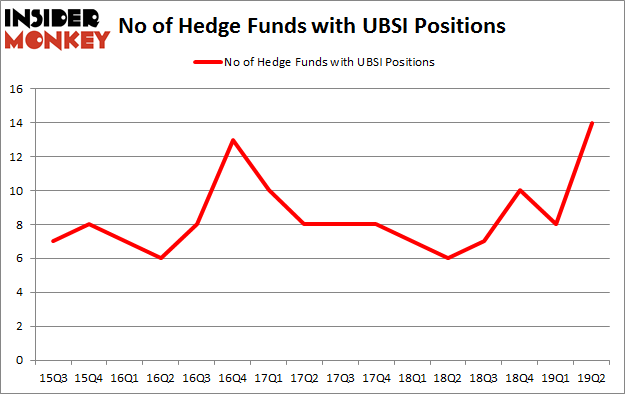 According to Insider Monkey’s hedge fund database, Basswood Capital, managed by Matthew Lindenbaum, holds the largest position in United Bankshares, Inc. (NASDAQ:UBSI). Basswood Capital has a $6.7 million position in the stock, comprising 0.4% of its 13F portfolio. Sitting at the No. 2 spot is Noam Gottesman of GLG Partners, with a $4 million position; the fund has less than 0.1%% of its 13F portfolio invested in the stock. Other professional money managers that are bullish encompass D. E. Shaw’s D E Shaw, Dmitry Balyasny’s Balyasny Asset Management and Israel Englander’s Millennium Management.

As one would reasonably expect, specific money managers have been driving this bullishness. Balyasny Asset Management, managed by Dmitry Balyasny, created the most valuable position in United Bankshares, Inc. (NASDAQ:UBSI). Balyasny Asset Management had $3 million invested in the company at the end of the quarter. Benjamin A. Smith’s Laurion Capital Management also made a $1.1 million investment in the stock during the quarter. The other funds with new positions in the stock are Ken Griffin’s Citadel Investment Group, Steve Cohen’s Point72 Asset Management, and Cliff Asness’s AQR Capital Management.

As you can see these stocks had an average of 11.75 hedge funds with bullish positions and the average amount invested in these stocks was $163 million. That figure was $27 million in UBSI’s case. Tech Data Corporation (NASDAQ:TECD) is the most popular stock in this table. On the other hand Embraer SA (NYSE:ERJ) is the least popular one with only 7 bullish hedge fund positions. United Bankshares, Inc. (NASDAQ:UBSI) is not the most popular stock in this group but hedge fund interest is still above average. Our calculations showed that top 20 most popular stocks among hedge funds returned 24.4% in 2019 through September 30th and outperformed the S&P 500 ETF (SPY) by 4 percentage points. Hedge funds were also right about betting on UBSI, though not to the same extent, as the stock returned 3% during the third quarter and outperformed the market as well.