Hedge Funds Have Never Been This Bullish On TransUnion (TRU)

Hedge Funds and other institutional investors have just completed filing their 13Fs with the Securities and Exchange Commission, revealing their equity portfolios as of the end of June. At Insider Monkey, we follow nearly 750 active hedge funds and notable investors and by analyzing their 13F filings, we can determine the stocks that they are collectively bullish on. One of their picks is TransUnion (NYSE:TRU), so let’s take a closer look at the sentiment that surrounds it in the current quarter.

Is TransUnion (NYSE:TRU) a great stock to buy now? Investors who are in the know are becoming hopeful. The number of long hedge fund positions rose by 1 in recent months. Our calculations also showed that TRU isn’t among the 30 most popular stocks among hedge funds (see the video below). 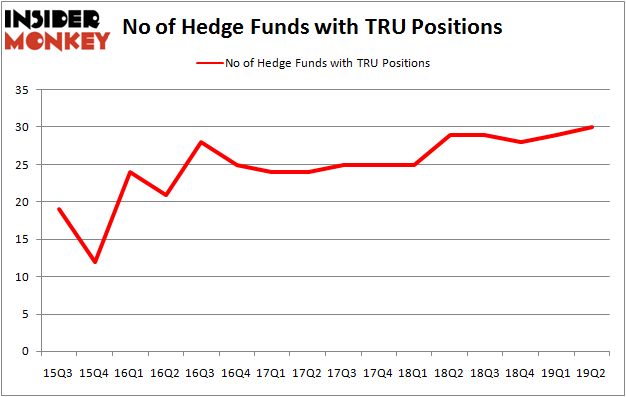 Unlike this former hedge fund manager who is convinced Dow will soar past 40000 in a year or two, our long-short investment strategy doesn’t rely on bull markets to deliver double digit returns. We only rely on hedge fund buy/sell signals. We’re going to take a look at the new hedge fund action surrounding TransUnion (NYSE:TRU).

At the end of the second quarter, a total of 30 of the hedge funds tracked by Insider Monkey were long this stock, a change of 3% from the previous quarter. Below, you can check out the change in hedge fund sentiment towards TRU over the last 16 quarters. With the smart money’s positions undergoing their usual ebb and flow, there exists a select group of notable hedge fund managers who were adding to their stakes meaningfully (or already accumulated large positions).

More specifically, Citadel Investment Group was the largest shareholder of TransUnion (NYSE:TRU), with a stake worth $324.3 million reported as of the end of March. Trailing Citadel Investment Group was Farallon Capital, which amassed a stake valued at $122.9 million. D E Shaw, Junto Capital Management, and Marshall Wace LLP were also very fond of the stock, giving the stock large weights in their portfolios.

As you can see these stocks had an average of 23 hedge funds with bullish positions and the average amount invested in these stocks was $554 million. That figure was $1003 million in TRU’s case. Symantec Corporation (NASDAQ:SYMC) is the most popular stock in this table. On the other hand Mid America Apartment Communities Inc (NYSE:MAA) is the least popular one with only 13 bullish hedge fund positions. TransUnion (NYSE:TRU) is not the most popular stock in this group but hedge fund interest is still above average. Our calculations showed that top 20 most popular stocks among hedge funds returned 24.4% in 2019 through September 30th and outperformed the S&P 500 ETF (SPY) by 4 percentage points. Hedge funds were also right about betting on TRU as the stock returned 10.4% during the third quarter and outperformed the market. Hedge funds were rewarded for their relative bullishness.