In these volatile markets we scrutinize hedge fund filings to get a reading on which direction each stock might be going. Hedge Funds and other institutional investors have just completed filing their 13Fs with the Securities and Exchange Commission, revealing their equity portfolios as of the end of June. At Insider Monkey, we follow nearly 835 active hedge funds and notable investors and by analyzing their 13F filings, we can determine the stocks that they are collectively bullish on. One of their picks is The Bank of New York Mellon Corporation (NYSE:BK), so let’s take a closer look at the sentiment that surrounds it in the current quarter.

The Bank of New York Mellon Corporation (NYSE:BK) investors should be aware of an increase in hedge fund interest of late. BK was in 58 hedge funds’ portfolios at the end of the fourth quarter of 2019. There were 55 hedge funds in our database with BK positions at the end of the previous quarter. Our calculations also showed that BK isn’t among the 30 most popular stocks among hedge funds (click for Q4 rankings and see the video below for Q3 rankings).

If you’d ask most market participants, hedge funds are perceived as underperforming, old financial vehicles of the past. While there are greater than 8000 funds trading at the moment, Our experts choose to focus on the leaders of this club, around 850 funds. These hedge fund managers preside over bulk of the smart money’s total asset base, and by tracking their inimitable picks, Insider Monkey has spotted many investment strategies that have historically surpassed Mr. Market. Insider Monkey’s flagship short hedge fund strategy outpaced the S&P 500 short ETFs by around 20 percentage points per annum since its inception in March 2017. Our portfolio of short stocks lost 35.3% since February 2017 (through March 3rd) even though the market was up more than 35% during the same period. We just shared a list of 7 short targets in our latest quarterly update .

We leave no stone unturned when looking for the next great investment idea. For example Europe is set to become the world’s largest cannabis market, so we check out this European marijuana stock pitch. We read hedge fund investor letters and listen to stock pitches at hedge fund conferences, and and go through short-term trade recommendations like this one. We even check out the recommendations of services with hard to believe track records. In January, we recommended a long position in one of the most shorted stocks in the market, and that stock returned more than 50% despite the large losses in the market since our recommendation. Now we’re going to check out the latest hedge fund action surrounding The Bank of New York Mellon Corporation (NYSE:BK).

Heading into the first quarter of 2020, a total of 58 of the hedge funds tracked by Insider Monkey were bullish on this stock, a change of 5% from the previous quarter. Below, you can check out the change in hedge fund sentiment towards BK over the last 18 quarters. So, let’s review which hedge funds were among the top holders of the stock and which hedge funds were making big moves. 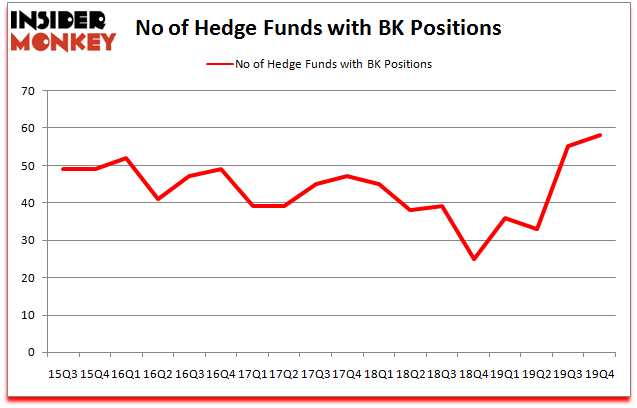 Among these funds, Berkshire Hathaway held the most valuable stake in The Bank of New York Mellon Corporation (NYSE:BK), which was worth $4014.6 million at the end of the third quarter. On the second spot was Trian Partners which amassed $611.7 million worth of shares. Citadel Investment Group, Millennium Management, and D E Shaw were also very fond of the stock, becoming one of the largest hedge fund holders of the company. In terms of the portfolio weights assigned to each position LFL Advisers allocated the biggest weight to The Bank of New York Mellon Corporation (NYSE:BK), around 7.04% of its 13F portfolio. Junto Capital Management is also relatively very bullish on the stock, setting aside 6.55 percent of its 13F equity portfolio to BK.

With a general bullishness amongst the heavyweights, specific money managers have been driving this bullishness. Moore Global Investments, managed by Louis Bacon, initiated the most outsized position in The Bank of New York Mellon Corporation (NYSE:BK). Moore Global Investments had $36.5 million invested in the company at the end of the quarter. Ravi Chopra’s Azora Capital also made a $18.4 million investment in the stock during the quarter. The following funds were also among the new BK investors: Renaissance Technologies, Ray Dalio’s Bridgewater Associates, and David Harding’s Winton Capital Management.

As you can see these stocks had an average of 36.5 hedge funds with bullish positions and the average amount invested in these stocks was $1878 million. That figure was $6711 million in BK’s case. Activision Blizzard, Inc. (NASDAQ:ATVI) is the most popular stock in this table. On the other hand UBS Group AG (NYSE:UBS) is the least popular one with only 14 bullish hedge fund positions. The Bank of New York Mellon Corporation (NYSE:BK) is not the most popular stock in this group but hedge fund interest is still above average. This is a slightly positive signal but we’d rather spend our time researching stocks that hedge funds are piling on. Our calculations showed that top 20 most popular stocks among hedge funds returned 41.3% in 2019 and outperformed the S&P 500 ETF (SPY) by 10.1 percentage points. These stocks lost 12.9% in 2020 through March 9th but beat the market by 1.9 percentage points. Unfortunately BK wasn’t nearly as popular as these 20 stocks and hedge funds that were betting on BK were disappointed as the stock returned -30.1% during the same time period and underperformed the market. If you are interested in investing in large cap stocks with huge upside potential, you should check out the top 20 most popular stocks among hedge funds as many of these stocks already outperformed the market so far this year.