Hedge Funds Have Never Been This Bullish On Sony Corporation (SNE)

The Insider Monkey team has completed processing the quarterly 13F filings for the June quarter submitted by the hedge funds and other money managers included in our extensive database. Most hedge fund investors experienced strong gains on the back of a strong market performance, which certainly propelled them to adjust their equity holdings so as to maintain the desired risk profile. As a result, the relevancy of these public filings and their content is indisputable, as they may reveal numerous high-potential stocks. The following article will discuss the smart money sentiment towards Sony Corporation (NYSE:SNE).

Is Sony Corporation (NYSE:SNE) a healthy stock for your portfolio? Hedge funds are betting on the stock. The number of long hedge fund positions increased by 13 lately. Our calculations also showed that SNE isn’t among the 30 most popular stocks among hedge funds (see the video below). SNE was in 35 hedge funds’ portfolios at the end of the second quarter of 2019. There were 22 hedge funds in our database with SNE holdings at the end of the previous quarter. 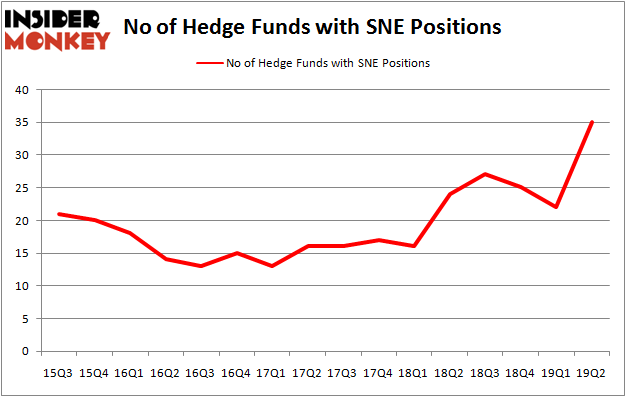 Unlike some fund managers who are betting on Dow reaching 40000 in a year, our long-short investment strategy doesn’t rely on bull markets to deliver double digit returns. We only rely on hedge fund buy/sell signals. We’re going to take a gander at the recent hedge fund action surrounding Sony Corporation (NYSE:SNE).

What have hedge funds been doing with Sony Corporation (NYSE:SNE)?

At the end of the second quarter, a total of 35 of the hedge funds tracked by Insider Monkey were long this stock, a change of 59% from the previous quarter. The graph below displays the number of hedge funds with bullish position in SNE over the last 16 quarters. With the smart money’s sentiment swirling, there exists a few key hedge fund managers who were boosting their stakes meaningfully (or already accumulated large positions).

More specifically, Soroban Capital Partners was the largest shareholder of Sony Corporation (NYSE:SNE), with a stake worth $200.8 million reported as of the end of March. Trailing Soroban Capital Partners was Renaissance Technologies, which amassed a stake valued at $194.5 million. GAMCO Investors, Suvretta Capital Management, and Third Point were also very fond of the stock, giving the stock large weights in their portfolios.

With a general bullishness amongst the heavyweights, key money managers were breaking ground themselves. Suvretta Capital Management, managed by Aaron Cowen, initiated the biggest position in Sony Corporation (NYSE:SNE). Suvretta Capital Management had $162.7 million invested in the company at the end of the quarter. Crispin Odey’s Odey Asset Management Group also initiated a $27.4 million position during the quarter. The other funds with brand new SNE positions are Benjamin Pass’s TOMS Capital, and Kelly Hampaul’s Everett Capital Advisors.

Let’s go over hedge fund activity in other stocks – not necessarily in the same industry as Sony Corporation (NYSE:SNE) but similarly valued. We will take a look at The Estee Lauder Companies Inc (NYSE:EL), Equinor ASA (NYSE:EQNR), Celgene Corporation (NASDAQ:CELG), and The Bank of Nova Scotia (NYSE:BNS). All of these stocks’ market caps match SNE’s market cap.

As you can see these stocks had an average of 38.25 hedge funds with bullish positions and the average amount invested in these stocks was $3212 million. That figure was $1036 million in SNE’s case. Celgene Corporation (NASDAQ:CELG) is the most popular stock in this table. On the other hand Equinor ASA (NYSE:EQNR) is the least popular one with only 13 bullish hedge fund positions. Sony Corporation (NYSE:SNE) is not the least popular stock in this group but hedge fund interest is still below average. Our calculations showed that top 20 most popular stocks among hedge funds returned 24.4% in 2019 through September 30th and outperformed the S&P 500 ETF (SPY) by 4 percentage points. A small number of hedge funds were also right about betting on SNE as the stock returned 12.9% during the same time frame and outperformed the market by an even larger margin.