Hedge Funds Have Never Been This Bullish On Schneider National, Inc. (SNDR)

We are still in an overall bull market and many stocks that smart money investors were piling into surged through October 17th. Among them, Facebook and Microsoft ranked among the top 3 picks and these stocks gained 45% and 39% respectively. Hedge funds’ top 3 stock picks returned 34.4% this year and beat the S&P 500 ETFs by 13 percentage points. Investing in index funds guarantees you average returns, not superior returns. We are looking to generate superior returns for our readers. That’s why we believe it isn’t a waste of time to check out hedge fund sentiment before you invest in a stock like Schneider National, Inc. (NYSE:SNDR).

Schneider National, Inc. (NYSE:SNDR) investors should be aware of an increase in support from the world’s most elite money managers recently. Our calculations also showed that SNDR isn’t among the 30 most popular stocks among hedge funds (view the video below).

If you’d ask most market participants, hedge funds are viewed as underperforming, old investment vehicles of the past. While there are greater than 8000 funds in operation at present, We hone in on the aristocrats of this club, about 750 funds. It is estimated that this group of investors shepherd bulk of the hedge fund industry’s total asset base, and by paying attention to their highest performing picks, Insider Monkey has discovered numerous investment strategies that have historically outpaced the S&P 500 index. Insider Monkey’s flagship hedge fund strategy outrun the S&P 500 index by around 5 percentage points per year since its inception in May 2014. We were able to generate large returns even by identifying short candidates. Our portfolio of short stocks lost 25.7% since February 2017 (through September 30th) even though the market was up more than 33% during the same period. We just shared a list of 10 short targets in our latest quarterly update .

What does smart money think about Schneider National, Inc. (NYSE:SNDR)? 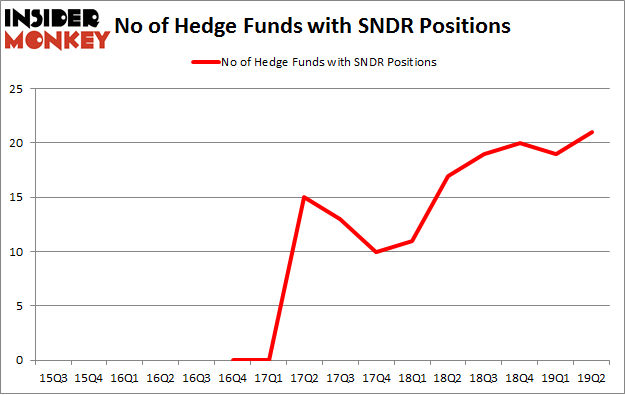 The largest stake in Schneider National, Inc. (NYSE:SNDR) was held by Renaissance Technologies, which reported holding $18.3 million worth of stock at the end of March. It was followed by Two Sigma Advisors with a $16.2 million position. Other investors bullish on the company included Millennium Management, AQR Capital Management, and Citadel Investment Group.

As industrywide interest jumped, some big names were breaking ground themselves. Marlowe Partners, managed by David Steinberg and Eric Udoff, assembled the largest position in Schneider National, Inc. (NYSE:SNDR). Marlowe Partners had $2.9 million invested in the company at the end of the quarter. Sara Nainzadeh’s Centenus Global Management also made a $2.7 million investment in the stock during the quarter. The other funds with new positions in the stock are Nick Niell’s Arrowgrass Capital Partners, Roger Ibbotson’s Zebra Capital Management, and Bruce Kovner’s Caxton Associates LP.

As you can see these stocks had an average of 14.25 hedge funds with bullish positions and the average amount invested in these stocks was $128 million. That figure was $96 million in SNDR’s case. Allegheny Technologies Incorporated (NYSE:ATI) is the most popular stock in this table. On the other hand Balchem Corporation (NASDAQ:BCPC) is the least popular one with only 9 bullish hedge fund positions. Schneider National, Inc. (NYSE:SNDR) is not the most popular stock in this group but hedge fund interest is still above average. Our calculations showed that top 20 most popular stocks among hedge funds returned 24.4% in 2019 through September 30th and outperformed the S&P 500 ETF (SPY) by 4 percentage points. Hedge funds were also right about betting on SNDR as the stock returned 19.4% during the third quarter and outperformed the market. Hedge funds were rewarded for their relative bullishness.