Hedge Funds Have Never Been This Bullish On RealPage, Inc. (RP)

With the first-quarter round of 13F filings behind us it is time to take a look at the stocks in which some of the best money managers in the world preferred to invest or sell heading into the second quarter. One of these stocks was RealPage, Inc. (NASDAQ:RP).

Is RealPage, Inc. (NASDAQ:RP) a marvelous investment right now? The smart money is getting more bullish. The number of long hedge fund bets increased by 7 recently. Our calculations also showed that RP isn’t among the 30 most popular stocks among hedge funds. RP was in 33 hedge funds’ portfolios at the end of June. There were 26 hedge funds in our database with RP holdings at the end of the previous quarter.

Unlike this former hedge fund manager who is convinced Dow will soar past 40000, our long-short investment strategy doesn’t rely on bull markets to deliver double digit returns. We only rely on hedge fund buy/sell signals. Let’s take a peek at the new hedge fund action surrounding RealPage, Inc. (NASDAQ:RP).

How have hedgies been trading RealPage, Inc. (NASDAQ:RP)?

Heading into the third quarter of 2019, a total of 33 of the hedge funds tracked by Insider Monkey were long this stock, a change of 27% from the previous quarter. On the other hand, there were a total of 28 hedge funds with a bullish position in RP a year ago. With hedge funds’ sentiment swirling, there exists a few notable hedge fund managers who were adding to their stakes significantly (or already accumulated large positions). 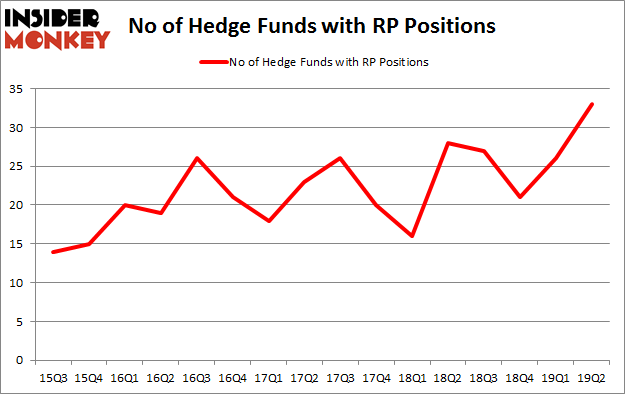 The largest stake in RealPage, Inc. (NASDAQ:RP) was held by Stockbridge Partners, which reported holding $213.4 million worth of stock at the end of March. It was followed by Eminence Capital with a $151 million position. Other investors bullish on the company included Echo Street Capital Management, Alkeon Capital Management, and Citadel Investment Group.

Now, some big names have jumped into RealPage, Inc. (NASDAQ:RP) headfirst. Eminence Capital, managed by Ricky Sandler, established the biggest position in RealPage, Inc. (NASDAQ:RP). Eminence Capital had $151 million invested in the company at the end of the quarter. Ken Griffin’s Citadel Investment Group also made a $19.5 million investment in the stock during the quarter. The other funds with new positions in the stock are Jack Ripsteen’s Potrero Capital Research, Dmitry Balyasny’s Balyasny Asset Management, and Nick Thakore’s Diametric Capital.

As you can see these stocks had an average of 25.5 hedge funds with bullish positions and the average amount invested in these stocks was $367 million. That figure was $584 million in RP’s case. Wyndham Hotels & Resorts, Inc. (NYSE:WH) is the most popular stock in this table. On the other hand Penumbra Inc (NYSE:PEN) is the least popular one with only 19 bullish hedge fund positions. RealPage, Inc. (NASDAQ:RP) is not the most popular stock in this group but hedge fund interest is still above average. Our calculations showed that top 20 most popular stocks (see the video below) among hedge funds returned 24.4% in 2019 through September 30th and outperformed the S&P 500 ETF (SPY) by 4 percentage points. Hedge funds were also right about betting on RP as the stock returned 6.8% during the third quarter and outperformed the market. Hedge funds were rewarded for their relative bullishness.