Hedge Funds Have Never Been This Bullish On Plug Power, Inc. (PLUG)

Hedge Funds and other institutional investors have just completed filing their 13Fs with the Securities and Exchange Commission, revealing their equity portfolios as of the end of June. At Insider Monkey, we follow nearly 750 active hedge funds and notable investors and by analyzing their 13F filings, we can determine the stocks that they are collectively bullish on. One of their picks is Plug Power, Inc. (NASDAQ:PLUG), so let’s take a closer look at the sentiment that surrounds it in the current quarter.

Plug Power, Inc. (NASDAQ:PLUG) was in 9 hedge funds’ portfolios at the end of the third quarter of 2019. PLUG shareholders have witnessed an increase in hedge fund interest lately. There were 8 hedge funds in our database with PLUG positions at the end of the previous quarter. Our calculations also showed that PLUG isn’t among the 30 most popular stocks among hedge funds (click for Q3 rankings and see the video below for Q2 rankings).

We leave no stone unturned when looking for the next great investment idea. For example Discover is offering this insane cashback card, so we look into shorting the stock. One of the most bullish analysts in America just put his money where his mouth is. He says, “I’m investing more today than I did back in early 2009.” So we check out his pitch. We read hedge fund investor letters and listen to stock pitches at hedge fund conferences. We even check out this option genius’ weekly trade ideas. This December we recommended Adams Energy  based on an under-the-radar fund manager’s investor letter and the stock gained 20 percent. We’re going to take a gander at the recent hedge fund action encompassing Plug Power, Inc. (NASDAQ:PLUG). 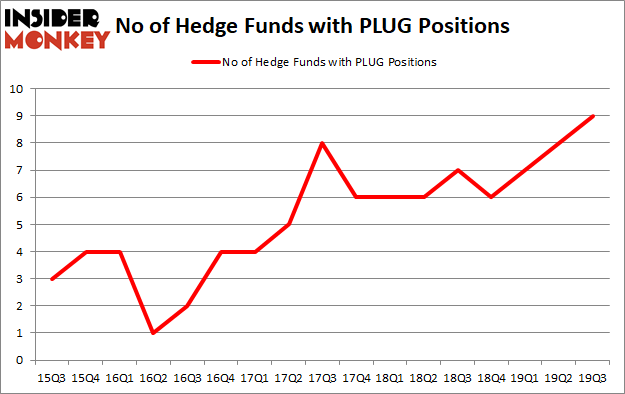 With a general bullishness amongst the heavyweights, specific money managers were leading the bulls’ herd. Hudson Bay Capital Management, managed by Sander Gerber, assembled the most outsized position in Plug Power, Inc. (NASDAQ:PLUG). Hudson Bay Capital Management had $2.8 million invested in the company at the end of the quarter. David E. Shaw’s D E Shaw also made a $0.8 million investment in the stock during the quarter. The only other fund with a brand new PLUG position is Joel Greenblatt’s Gotham Asset Management.

As you can see these stocks had an average of 7.75 hedge funds with bullish positions and the average amount invested in these stocks was $67 million. That figure was $44 million in PLUG’s case. Houghton Mifflin Harcourt Co (NASDAQ:HMHC) is the most popular stock in this table. On the other hand Global Partners LP (NYSE:GLP) is the least popular one with only 2 bullish hedge fund positions. Plug Power, Inc. (NASDAQ:PLUG) is not the most popular stock in this group but hedge fund interest is still above average. Our calculations showed that top 20 most popular stocks among hedge funds returned 37.4% in 2019 through the end of November and outperformed the S&P 500 ETF (SPY) by 9.9 percentage points. Hedge funds were also right about betting on PLUG as the stock returned 48.3% during the fourth quarter (through the end of November) and outperformed the market. Hedge funds were rewarded for their relative bullishness.