Hedge Funds Have Never Been This Bullish On Mastercard (MA)

The Insider Monkey team has completed processing the quarterly 13F filings for the June quarter submitted by the hedge funds and other money managers included in our extensive database. Most hedge fund investors experienced strong gains on the back of a strong market performance, which certainly propelled them to adjust their equity holdings so as to maintain the desired risk profile. As a result, the relevancy of these public filings and their content is indisputable, as they may reveal numerous high-potential stocks. The following article will discuss the smart money sentiment towards Mastercard Incorporated (NYSE:MA).

Mastercard Incorporated (NYSE:MA) was in 99 hedge funds’ portfolios at the end of the second quarter of 2019. MA investors should be aware of an increase in hedge fund interest of late. Overall hedge fund sentiment towards MA reached an all time high at the end of June and Mastercard stock currently ranks 10th among the list of 30 most popular stocks among hedge funds.

Unlike some fund managers who are betting on Dow reaching 40000 in a year, our long-short investment strategy doesn’t rely on bull markets to deliver double digit returns. We only rely on hedge fund buy/sell signals. We’re going to analyze the latest hedge fund action regarding Mastercard Incorporated (NYSE:MA).

Heading into the third quarter of 2019, a total of 99 of the hedge funds tracked by Insider Monkey were long this stock, a change of 5% from the first quarter of 2019. On the other hand, there were a total of 88 hedge funds with a bullish position in MA a year ago. With the smart money’s capital changing hands, there exists an “upper tier” of key hedge fund managers who were upping their holdings substantially (or already accumulated large positions). 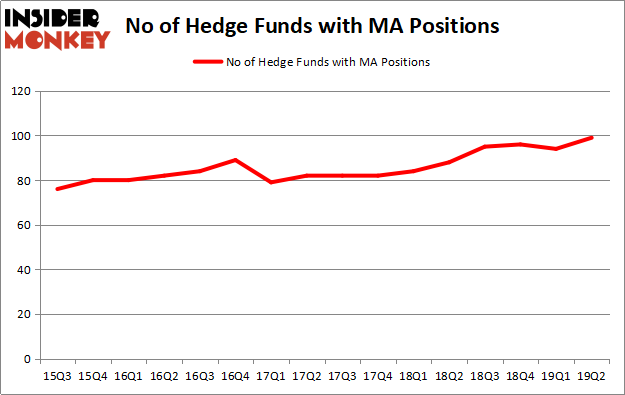 The largest stake in Mastercard Incorporated (NYSE:MA) was held by Gardner Russo & Gardner, which reported holding $1829.2 million worth of stock at the end of March. It was followed by Akre Capital Management with a $1409.3 million position. Other investors bullish on the company included Berkshire Hathaway, Arrowstreet Capital, and AQR Capital Management.

As you can see these stocks had an average of 60.25 hedge funds with bullish positions and the average amount invested in these stocks was $3345 million. That figure was $12042 million in MA’s case. The Walt Disney Company (NYSE:DIS) is the most popular stock in this table. On the other hand Royal Dutch Shell plc (NYSE:RDS) is the least popular one with only 34 bullish hedge fund positions. Mastercard Incorporated (NYSE:MA) is not the most popular stock in this group but hedge fund interest is still above average. Our calculations showed that top 20 most popular stocks among hedge funds returned 24.4% in 2019 through September 30th and outperformed the S&P 500 ETF (SPY) by 4 percentage points. Hedge funds were also right about betting on MA as the stock returned 2.8% during the third quarter and outperformed the market as well.