Hedge Funds Have Never Been This Bullish On KKR & Co Inc. (KKR)

Is KKR & Co Inc. (NYSE:KKR) a good bet right now? We like to analyze hedge fund sentiment before conducting days of in-depth research. We do so because hedge funds and other elite investors have numerous Ivy League graduates, expert network advisers, and supply chain tipsters working or consulting for them. There is not a shortage of news stories covering failed hedge fund investments and it is a fact that hedge funds’ picks don’t beat the market 100% of the time, but their consensus picks have historically done very well and have outperformed the market after adjusting for risk.

KKR & Co Inc. (NYSE:KKR) was in 36 hedge funds’ portfolios at the end of June. KKR has experienced an increase in support from the world’s most elite money managers recently. There were 30 hedge funds in our database with KKR holdings at the end of the previous quarter. Our calculations also showed that KKR isn’t among the 30 most popular stocks among hedge funds (see the video below).

What does smart money think about KKR & Co Inc. (NYSE:KKR)?

At Q2’s end, a total of 36 of the hedge funds tracked by Insider Monkey were long this stock, a change of 20% from one quarter earlier. On the other hand, there were a total of 24 hedge funds with a bullish position in KKR a year ago. With hedgies’ capital changing hands, there exists a few key hedge fund managers who were boosting their holdings considerably (or already accumulated large positions). 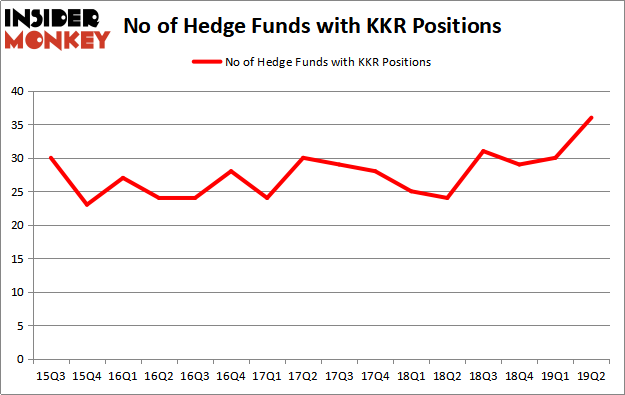 More specifically, ValueAct Capital was the largest shareholder of KKR & Co Inc. (NYSE:KKR), with a stake worth $1281.2 million reported as of the end of March. Trailing ValueAct Capital was Akre Capital Management, which amassed a stake valued at $322.3 million. Egerton Capital Limited, Pzena Investment Management, and Diamond Hill Capital were also very fond of the stock, giving the stock large weights in their portfolios.

With a general bullishness amongst the heavyweights, some big names were breaking ground themselves. Iridian Asset Management, managed by David Cohen and Harold Levy, assembled the largest position in KKR & Co Inc. (NYSE:KKR). Iridian Asset Management had $158.4 million invested in the company at the end of the quarter. Edgar Wachenheim’s Greenhaven Associates also initiated a $36.7 million position during the quarter. The other funds with new positions in the stock are Arnaud Ajdler’s Engine Capital, Noam Gottesman’s GLG Partners, and Brandon Haley’s Holocene Advisors.

Let’s now take a look at hedge fund activity in other stocks – not necessarily in the same industry as KKR & Co Inc. (NYSE:KKR) but similarly valued. We will take a look at Parker-Hannifin Corporation (NYSE:PH), Microchip Technology Incorporated (NASDAQ:MCHP), Centene Corp (NYSE:CNC), and Mettler-Toledo International Inc. (NYSE:MTD). All of these stocks’ market caps are closest to KKR’s market cap.

As you can see these stocks had an average of 34.25 hedge funds with bullish positions and the average amount invested in these stocks was $1094 million. That figure was $2910 million in KKR’s case. Centene Corp (NYSE:CNC) is the most popular stock in this table. On the other hand Mettler-Toledo International Inc. (NYSE:MTD) is the least popular one with only 20 bullish hedge fund positions. KKR & Co Inc. (NYSE:KKR) is not the most popular stock in this group but hedge fund interest is still above average. Our calculations showed that top 20 most popular stocks among hedge funds returned 24.4% in 2019 through September 30th and outperformed the S&P 500 ETF (SPY) by 4 percentage points. Hedge funds were also right about betting on KKR as the stock returned 6.8% during the third quarter and outperformed the market. Hedge funds were rewarded for their relative bullishness.