Hedge Funds Have Never Been This Bullish On Kemper Corporation (KMPR)

The market has been volatile in the last few months as the Federal Reserve continued its rate cuts and uncertainty looms over trade negotiations with China. Small cap stocks have been hit hard as a result, as the Russell 2000 ETF (IWM) has underperformed the larger S&P 500 ETF (SPY) by more than 10 percentage points over the last 12 months. SEC filings and hedge fund investor letters indicate that the smart money seems to be paring back their overall long exposure since summer months, though some funds increased their exposure dramatically at the end of Q2 and the beginning of Q3. In this article, we analyze what the smart money thinks of Kemper Corporation (NYSE:KMPR) and find out how it is affected by hedge funds’ moves.

Kemper Corporation (NYSE:KMPR) investors should pay attention to an increase in enthusiasm from smart money lately. KMPR was in 19 hedge funds’ portfolios at the end of June. There were 8 hedge funds in our database with KMPR holdings at the end of the previous quarter. Our calculations also showed that KMPR isn’t among the 30 most popular stocks among hedge funds (view the video below).

If you’d ask most traders, hedge funds are seen as slow, old financial tools of yesteryear. While there are greater than 8000 funds with their doors open at present, We choose to focus on the upper echelon of this club, around 750 funds. These money managers control most of the smart money’s total asset base, and by tailing their best investments, Insider Monkey has deciphered several investment strategies that have historically outperformed the market. Insider Monkey’s flagship hedge fund strategy outrun the S&P 500 index by around 5 percentage points per annum since its inception in May 2014. We were able to generate large returns even by identifying short candidates. Our portfolio of short stocks lost 25.7% since February 2017 (through September 30th) even though the market was up more than 33% during the same period. We just shared a list of 10 short targets in our latest quarterly update . 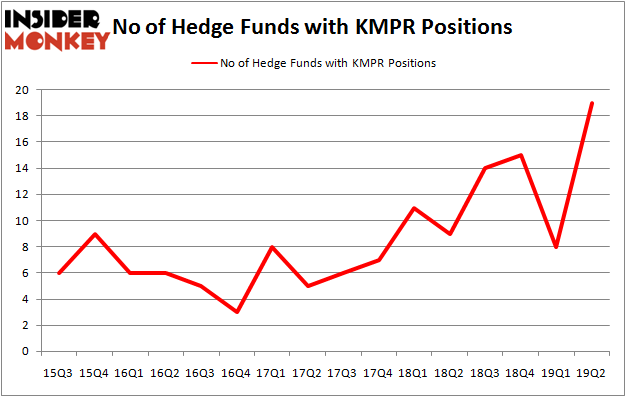 Unlike some fund managers who are betting on Dow reaching 40000 in a year, our long-short investment strategy doesn’t rely on bull markets to deliver double digit returns. We only rely on hedge fund buy/sell signals. Let’s take a look at the new hedge fund action encompassing Kemper Corporation (NYSE:KMPR).

Heading into the third quarter of 2019, a total of 19 of the hedge funds tracked by Insider Monkey were bullish on this stock, a change of 138% from the previous quarter. Below, you can check out the change in hedge fund sentiment towards KMPR over the last 16 quarters. With the smart money’s positions undergoing their usual ebb and flow, there exists a select group of key hedge fund managers who were upping their holdings considerably (or already accumulated large positions).

Consequently, some big names were leading the bulls’ herd. Chilton Investment Company, managed by Richard Chilton, initiated the most outsized position in Kemper Corporation (NYSE:KMPR). Chilton Investment Company had $67.7 million invested in the company at the end of the quarter. Paul Marshall and Ian Wace’s Marshall Wace LLP also made a $18.3 million investment in the stock during the quarter. The following funds were also among the new KMPR investors: Michael Gelband’s ExodusPoint Capital, Ben Levine, Andrew Manuel and Stefan Renold’s LMR Partners, and Bruce Kovner’s Caxton Associates LP.

As you can see these stocks had an average of 23.25 hedge funds with bullish positions and the average amount invested in these stocks was $500 million. That figure was $173 million in KMPR’s case. Zynga Inc (NASDAQ:ZNGA) is the most popular stock in this table. On the other hand Aluminum Corp. of China Limited (NYSE:ACH) is the least popular one with only 5 bullish hedge fund positions. Kemper Corporation (NYSE:KMPR) is not the least popular stock in this group but hedge fund interest is still below average. This is a slightly negative signal and we’d rather spend our time researching stocks that hedge funds are piling on. Our calculations showed that top 20 most popular stocks among hedge funds returned 24.4% in 2019 through September 30th and outperformed the S&P 500 ETF (SPY) by 4 percentage points. Unfortunately KMPR wasn’t nearly as popular as these 20 stocks (hedge fund sentiment was quite bearish); KMPR investors were disappointed as the stock returned -9.4% during the third quarter and underperformed the market. If you are interested in investing in large cap stocks with huge upside potential, you should check out the top 20 most popular stocks among hedge funds as many of these stocks already outperformed the market so far in 2019.