Hedge Funds Have Never Been This Bullish On IRSA Propiedades Comerciales S.A. (IRCP)

Is IRSA Propiedades Comerciales S.A. (NASDAQ:IRCP) a superb investment right now? The best stock pickers are in a bullish mood. The number of long hedge fund bets moved up by 2 lately. Our calculations also showed that IRCP isn’t among the 30 most popular stocks among hedge funds. IRCP was in 5 hedge funds’ portfolios at the end of the fourth quarter of 2018. There were 3 hedge funds in our database with IRCP holdings at the end of the previous quarter.

How have hedgies been trading IRSA Propiedades Comerciales S.A. (NASDAQ:IRCP)?

At the end of the fourth quarter, a total of 5 of the hedge funds tracked by Insider Monkey were long this stock, a change of 67% from one quarter earlier. Below, you can check out the change in hedge fund sentiment towards IRCP over the last 14 quarters. So, let’s review which hedge funds were among the top holders of the stock and which hedge funds were making big moves. 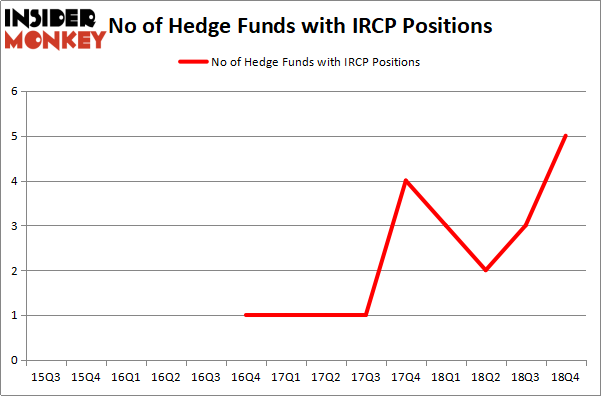 As one would reasonably expect, specific money managers have been driving this bullishness. Autonomy Capital, managed by Robert Charles Gibbins, established the most valuable position in IRSA Propiedades Comerciales S.A. (NASDAQ:IRCP). Autonomy Capital had $1.4 million invested in the company at the end of the quarter. Bruce J. Richards and Louis Hanover’s Marathon Asset Management also initiated a $0 million position during the quarter.

As you can see these stocks had an average of 11 hedge funds with bullish positions and the average amount invested in these stocks was $82 million. That figure was $11 million in IRCP’s case. Coherus Biosciences Inc (NASDAQ:CHRS) is the most popular stock in this table. On the other hand Central Securities Corporation (NYSE:CET) is the least popular one with only 2 bullish hedge fund positions. IRSA Propiedades Comerciales S.A. (NASDAQ:IRCP) is not the least popular stock in this group but hedge fund interest is still below average. This is a slightly negative signal and we’d rather spend our time researching stocks that hedge funds are piling on. Our calculations showed that top 15 most popular stocks) among hedge funds returned 24.2% through April 22nd and outperformed the S&P 500 ETF (SPY) by more than 7 percentage points. Unfortunately IRCP wasn’t nearly as popular as these 15 stock (hedge fund sentiment was quite bearish); IRCP investors were disappointed as the stock returned 3.7% and underperformed the market. If you are interested in investing in large cap stocks with huge upside potential, you should check out the top 15 most popular stocks) among hedge funds as 13 of these stocks already outperformed the market this year.