Hedge Funds Have Never Been This Bullish On Inspire Medical Systems, Inc. (INSP)

We can judge whether Inspire Medical Systems, Inc. (NYSE:INSP) is a good investment right now by following the lead of some of the best investors in the world and piggybacking their ideas. There’s no better way to get these firms’ immense resources and analytical capabilities working for us than to follow their lead into their best ideas. While not all of these picks will be winners, our research shows that these picks historically outperformed the market when we factor in known risk factors.

Is Inspire Medical Systems, Inc. (NYSE:INSP) a worthy investment right now? Investors who are in the know are becoming more confident. The number of long hedge fund positions rose by 2 in recent months. Our calculations also showed that insp isn’t among the 30 most popular stocks among hedge funds. INSP was in 15 hedge funds’ portfolios at the end of December. There were 13 hedge funds in our database with INSP holdings at the end of the previous quarter.

What have hedge funds been doing with Inspire Medical Systems, Inc. (NYSE:INSP)? 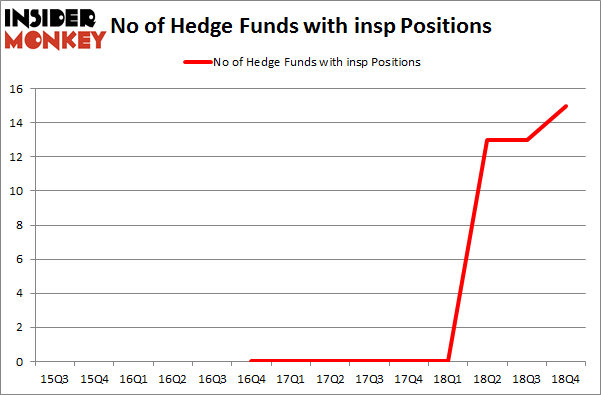 According to Insider Monkey’s hedge fund database, OrbiMed Advisors, managed by Samuel Isaly, holds the biggest position in Inspire Medical Systems, Inc. (NYSE:INSP). OrbiMed Advisors has a $77.3 million position in the stock, comprising 1.4% of its 13F portfolio. Sitting at the No. 2 spot is Richard Driehaus of Driehaus Capital, with a $19.8 million position; the fund has 0.8% of its 13F portfolio invested in the stock. Some other professional money managers that hold long positions comprise James E. Flynn’s Deerfield Management, Efrem Kamen’s Pura Vida Investments and Bihua Chen’s Cormorant Asset Management.

As you can see these stocks had an average of 13 hedge funds with bullish positions and the average amount invested in these stocks was $95 million. That figure was $178 million in INSP’s case. Varex Imaging Corporation (NASDAQ:VREX) is the most popular stock in this table. On the other hand Emerald Expositions Events, Inc. (NYSE:EEX) is the least popular one with only 11 bullish hedge fund positions. Inspire Medical Systems, Inc. (NYSE:INSP) is not the most popular stock in this group but hedge fund interest is still above average. This is a slightly positive signal but we’d rather spend our time researching stocks that hedge funds are piling on. Our calculations showed that top 15 most popular stocks) among hedge funds returned 24.2% through April 22nd and outperformed the S&P 500 ETF (SPY) by more than 7 percentage points. Unfortunately INSP wasn’t nearly as popular as these 15 stock and hedge funds that were betting on INSP were disappointed as the stock returned 12.8% and underperformed the market. If you are interested in investing in large cap stocks with huge upside potential, you should check out the top 15 most popular stocks) among hedge funds as 13 of these stocks already outperformed the market this year.