Hedge Funds Have Never Been This Bullish On Grifols SA (GRFS)

The first quarter was a breeze as Powell pivoted, and China seemed eager to reach a deal with Trump. Both the S&P 500 and Russell 2000 delivered very strong gains as a result, with the Russell 2000, which is composed of smaller companies, outperforming the large-cap stocks slightly during the first quarter. Unfortunately sentiment shifted in May and August as this time China pivoted and Trump put more pressure on China by increasing tariffs. Fourth quarter brought optimism to the markets and hedge funds’ top 20 stock picks performed spectacularly in this volatile environment. These stocks delivered a total gain of 37.4% through the end of November, vs. a gain of 27.5% for the S&P 500 ETF. In this article we will look at how this market volatility affected the sentiment of hedge funds towards Grifols SA (NASDAQ:GRFS), and what that likely means for the prospects of the company and its stock.

Grifols SA (NASDAQ:GRFS) was in 19 hedge funds’ portfolios at the end of the third quarter of 2019. GRFS shareholders have witnessed an increase in hedge fund sentiment lately. There were 16 hedge funds in our database with GRFS positions at the end of the previous quarter. Our calculations also showed that GRFS isn’t among the 30 most popular stocks among hedge funds (click for Q3 rankings and see the video below for Q2 rankings).

Unlike the largest US hedge funds that are convinced Dow will soar past 40,000 or the world’s most bearish hedge fund that’s more convinced than ever that a crash is coming, our long-short investment strategy doesn’t rely on bull or bear markets to deliver double digit returns. We only rely on the best performing hedge funds‘ buy/sell signals. Let’s analyze the latest hedge fund action regarding Grifols SA (NASDAQ:GRFS).

How have hedgies been trading Grifols SA (NASDAQ:GRFS)?

At Q3’s end, a total of 19 of the hedge funds tracked by Insider Monkey were bullish on this stock, a change of 19% from the second quarter of 2019. The graph below displays the number of hedge funds with bullish position in GRFS over the last 17 quarters. With hedgies’ sentiment swirling, there exists an “upper tier” of key hedge fund managers who were upping their holdings significantly (or already accumulated large positions). 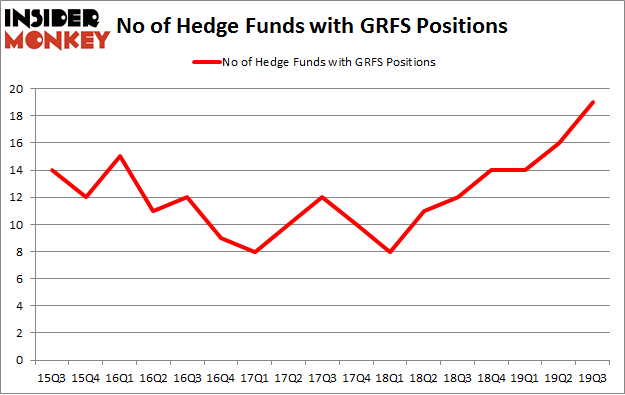 Among these funds, Farallon Capital held the most valuable stake in Grifols SA (NASDAQ:GRFS), which was worth $62.4 million at the end of the third quarter. On the second spot was Whitebox Advisors which amassed $43.8 million worth of shares. Soros Fund Management, Millennium Management, and Citadel Investment Group were also very fond of the stock, becoming one of the largest hedge fund holders of the company. In terms of the portfolio weights assigned to each position Pura Vida Investments allocated the biggest weight to Grifols SA (NASDAQ:GRFS), around 3.48% of its 13F portfolio. Sivik Global Healthcare is also relatively very bullish on the stock, setting aside 2.98 percent of its 13F equity portfolio to GRFS.

As industrywide interest jumped, key money managers were leading the bulls’ herd. Arrowstreet Capital, managed by Peter Rathjens, Bruce Clarke and John Campbell, initiated the largest position in Grifols SA (NASDAQ:GRFS). Arrowstreet Capital had $15.3 million invested in the company at the end of the quarter. Steve Cohen’s Point72 Asset Management also made a $14.7 million investment in the stock during the quarter. The other funds with brand new GRFS positions are Efrem Kamen’s Pura Vida Investments and Louis Bacon’s Moore Global Investments.

As you can see these stocks had an average of 22 hedge funds with bullish positions and the average amount invested in these stocks was $589 million. That figure was $361 million in GRFS’s case. Concho Resources Inc. (NYSE:CXO) is the most popular stock in this table. On the other hand Enel Americas S.A. (NYSE:ENIA) is the least popular one with only 8 bullish hedge fund positions. Grifols SA (NASDAQ:GRFS) is not the least popular stock in this group but hedge fund interest is still below average. Our calculations showed that top 20 most popular stocks among hedge funds returned 37.4% in 2019 through the end of November and outperformed the S&P 500 ETF (SPY) by 9.9 percentage points. A small number of hedge funds were also right about betting on GRFS as the stock returned 14.2% during the first two months of Q4 and outperformed the market by an even larger margin.