Insider Monkey has processed numerous 13F filings of hedge funds and successful value investors to create an extensive database of hedge fund holdings. The 13F filings show the hedge funds’ and successful investors’ positions as of the end of the third quarter. You can find articles about an individual hedge fund’s trades on numerous financial news websites. However, in this article we will take a look at their collective moves over the last 4 years and analyze what the smart money thinks of Fortress Biotech Inc (NASDAQ:FBIO) based on that data.

Is Fortress Biotech Inc (NASDAQ:FBIO) a healthy stock for your portfolio? The smart money is taking a bullish view. The number of long hedge fund bets improved by 1 in recent months. Our calculations also showed that FBIO isn’t among the 30 most popular stocks among hedge funds (click for Q3 rankings and see the video below for Q2 rankings).

We leave no stone unturned when looking for the next great investment idea. For example Europe is set to become the world’s largest cannabis market, so we check out this European marijuana stock pitch. One of the most bullish analysts in America just put his money where his mouth is. He says, “I’m investing more today than I did back in early 2009.” So we check out his pitch. We read hedge fund investor letters and listen to stock pitches at hedge fund conferences. We also rely on the best performing hedge funds‘ buy/sell signals. We’re going to take a gander at the fresh hedge fund action surrounding Fortress Biotech Inc (NASDAQ:FBIO).

What have hedge funds been doing with Fortress Biotech Inc (NASDAQ:FBIO)? 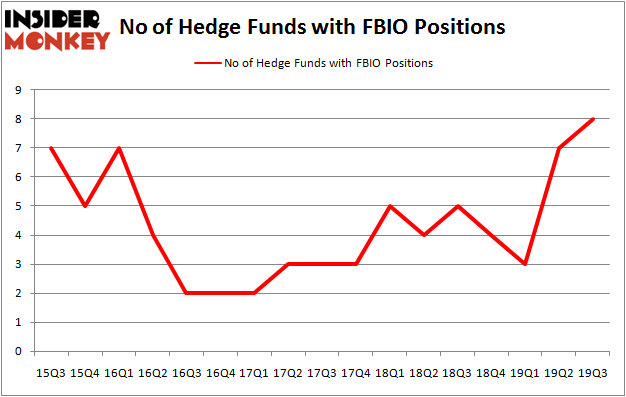 The largest stake in Fortress Biotech Inc (NASDAQ:FBIO) was held by Opaleye Management, which reported holding $2.3 million worth of stock at the end of September. It was followed by Opus Point Partners Management with a $0.9 million position. Other investors bullish on the company included Millennium Management, Nantahala Capital Management, and 683 Capital Partners. In terms of the portfolio weights assigned to each position Opus Point Partners Management allocated the biggest weight to Fortress Biotech Inc (NASDAQ:FBIO), around 1.56% of its 13F portfolio. Opaleye Management is also relatively very bullish on the stock, earmarking 0.84 percent of its 13F equity portfolio to FBIO.

Consequently, key hedge funds have jumped into Fortress Biotech Inc (NASDAQ:FBIO) headfirst. Opaleye Management, managed by James A. Silverman, created the biggest position in Fortress Biotech Inc (NASDAQ:FBIO). Opaleye Management had $2.3 million invested in the company at the end of the quarter. Wilmot B. Harkey and Daniel Mack’s Nantahala Capital Management also made a $0.5 million investment in the stock during the quarter. The other funds with new positions in the stock are Ari Zweiman’s 683 Capital Partners and Paul Marshall and Ian Wace’s Marshall Wace.

As you can see these stocks had an average of 3.75 hedge funds with bullish positions and the average amount invested in these stocks was $14 million. That figure was $5 million in FBIO’s case. Fennec Pharmaceuticals Inc. (NASDAQ:FENC) is the most popular stock in this table. On the other hand Cortland Bancorp (NASDAQ:CLDB) is the least popular one with only 3 bullish hedge fund positions. Compared to these stocks Fortress Biotech Inc (NASDAQ:FBIO) is more popular among hedge funds. Our calculations showed that top 20 most popular stocks among hedge funds returned 37.4% in 2019 through the end of November and outperformed the S&P 500 ETF (SPY) by 9.9 percentage points. Hedge funds were also right about betting on FBIO as the stock returned 46.1% during the first two months of Q4 and outperformed the market by an even larger margin. Hedge funds were clearly right about piling into this stock relative to other stocks with similar market capitalizations.

Is Viking Therapeutics, Inc. (VKTX) A Good Stock To Buy?
Monthly Newsletter Strategy
Download a free copy of our newsletter and see the details inside!
Hedge Fund Resource Center
Related News
Fortress Biotech Inc (FBIO) Spike: Is It Deserved, And What’s Next? A Look at Billionaire Paul Singer’s Long-Term Investments Fortress Biotech Inc (FBIO)Hedge Funds Are Snapping Up Activist Investor Paul Singer Ups His Stake In The Re-Branded Fortress Biotech Inc. (FBIO) 10 Countries with the Highest Coffee Consumption in the World 10 Stocks That Went Up During The 2008 Crash 10 Movies About Amnesia on Netflix
Billionaire Hedge Funds