Hedge Funds Have Never Been This Bullish On ForeScout Technologies, Inc. (FSCT)

ForeScout Technologies, Inc. (NASDAQ:FSCT) investors should be aware of an increase in enthusiasm from smart money recently. FSCT was in 17 hedge funds’ portfolios at the end of the fourth quarter of 2018. There were 16 hedge funds in our database with FSCT holdings at the end of the previous quarter. Our calculations also showed that FSCT isn’t among the 30 most popular stocks among hedge funds.

What does the smart money think about ForeScout Technologies, Inc. (NASDAQ:FSCT)?

At the end of the fourth quarter, a total of 17 of the hedge funds tracked by Insider Monkey held long positions in this stock, a change of 6% from the previous quarter. Below, you can check out the change in hedge fund sentiment towards FSCT over the last 14 quarters. So, let’s see which hedge funds were among the top holders of the stock and which hedge funds were making big moves. 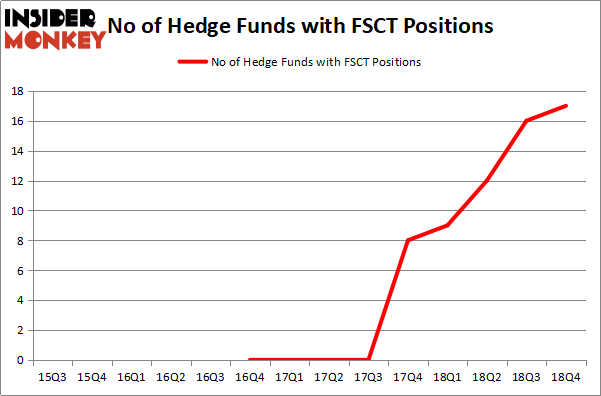 Among these funds, Eminence Capital held the most valuable stake in ForeScout Technologies, Inc. (NASDAQ:FSCT), which was worth $34.6 million at the end of the fourth quarter. On the second spot was Point72 Asset Management which amassed $34 million worth of shares. Moreover, Jericho Capital Asset Management, North Run Capital, and Renaissance Technologies were also bullish on ForeScout Technologies, Inc. (NASDAQ:FSCT), allocating a large percentage of their portfolios to this stock.

Let’s check out hedge fund activity in other stocks – not necessarily in the same industry as ForeScout Technologies, Inc. (NASDAQ:FSCT) but similarly valued. We will take a look at Sandy Spring Bancorp Inc. (NASDAQ:SASR), Brookline Bancorp, Inc. (NASDAQ:BRKL), Arco Platform Limited (NASDAQ:ARCE), and TIER REIT, Inc. (NYSE:TIER). All of these stocks’ market caps are similar to FSCT’s market cap.

As you can see these stocks had an average of 10 hedge funds with bullish positions and the average amount invested in these stocks was $55 million. That figure was $152 million in FSCT’s case. Sandy Spring Bancorp Inc. (NASDAQ:SASR) is the most popular stock in this table. On the other hand TIER REIT, Inc. (NYSE:TIER) is the least popular one with only 7 bullish hedge fund positions. Compared to these stocks ForeScout Technologies, Inc. (NASDAQ:FSCT) is more popular among hedge funds. Our calculations showed that top 15 most popular stocks) among hedge funds returned 24.2% through April 22nd and outperformed the S&P 500 ETF (SPY) by more than 7 percentage points. Hedge funds were also right about betting on FSCT as the stock returned 48.9% and outperformed the market by an even larger margin. Hedge funds were clearly right about piling into this stock relative to other stocks with similar market capitalizations.