Last year’s fourth quarter was a rough one for investors and many hedge funds, which were naturally unable to overcome the big dip in the broad market, as the S&P 500 fell by about 4.8% during 2018 and average hedge fund losing about 1%. The Russell 2000, composed of smaller companies, performed even worse, trailing the S&P by more than 6 percentage points, as investors fled less-known quantities for safe havens. Luckily hedge funds were shifting their holdings into large-cap stocks. The 20 most popular hedge fund stocks actually generated an average return of 37.4% in 2019 (through the end of November) and outperformed the S&P 500 ETF by 9.9 percentage points. We are done processing the latest 13F filings and in this article we will study how hedge fund sentiment towards Fate Therapeutics Inc (NASDAQ:FATE) changed during the first quarter.

Fate Therapeutics Inc (NASDAQ:FATE) was in 23 hedge funds’ portfolios at the end of September. FATE shareholders have witnessed an increase in activity from the world’s largest hedge funds recently. There were 18 hedge funds in our database with FATE holdings at the end of the previous quarter. Our calculations also showed that FATE isn’t among the 30 most popular stocks among hedge funds (click for Q3 rankings and see the video below for Q2 rankings).

Unlike the largest US hedge funds that are convinced Dow will soar past 40,000 or the world’s most bearish hedge fund that’s more convinced than ever that a crash is coming, our long-short investment strategy doesn’t rely on bull or bear markets to deliver double digit returns. We only rely on the best performing hedge funds‘ buy/sell signals. Let’s check out the new hedge fund action regarding Fate Therapeutics Inc (NASDAQ:FATE). 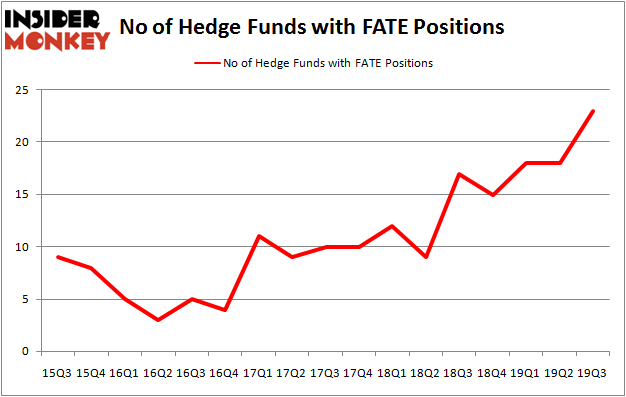 As industrywide interest jumped, some big names were breaking ground themselves. Citadel Investment Group, managed by Ken Griffin, assembled the most valuable position in Fate Therapeutics Inc (NASDAQ:FATE). Citadel Investment Group had $8.9 million invested in the company at the end of the quarter. Ken Greenberg and David Kim’s Ghost Tree Capital also made a $5.4 million investment in the stock during the quarter. The other funds with brand new FATE positions are Vishal Saluja and Pham Quang’s Endurant Capital Management, Minhua Zhang’s Weld Capital Management, and John W. Rende’s Copernicus Capital Management.

As you can see these stocks had an average of 10.75 hedge funds with bullish positions and the average amount invested in these stocks was $59 million. That figure was $417 million in FATE’s case. Orthofix Medical Inc. (NASDAQ:OFIX) is the most popular stock in this table. On the other hand Accelerate Diagnostics Inc (NASDAQ:AXDX) is the least popular one with only 6 bullish hedge fund positions. Compared to these stocks Fate Therapeutics Inc (NASDAQ:FATE) is more popular among hedge funds. Our calculations showed that top 20 most popular stocks among hedge funds returned 37.4% in 2019 through the end of November and outperformed the S&P 500 ETF (SPY) by 9.9 percentage points. Unfortunately FATE wasn’t nearly as popular as these 20 stocks and hedge funds that were betting on FATE were disappointed as the stock returned 0.6% during the first two months of the fourth quarter and underperformed the market. If you are interested in investing in large cap stocks with huge upside potential, you should check out the top 20 most popular stocks among hedge funds as 70 percent of these stocks already outperformed the market in Q4.