Hedge Funds Have Never Been This Bullish On Evercore Inc. (EVR)

After several tireless days we have finished crunching the numbers from nearly 750 13F filings issued by the elite hedge funds and other investment firms that we track at Insider Monkey, which disclosed those firms’ equity portfolios as of June 28. The results of that effort will be put on display in this article, as we share valuable insight into the smart money sentiment towards Evercore Inc. (NYSE:EVR).

Is Evercore Inc. (NYSE:EVR) a sound investment right now? Prominent investors are buying. The number of bullish hedge fund positions inched up by 1 lately. Our calculations also showed that EVR isn’t among the 30 most popular stocks among hedge funds (see the video below). EVR was in 26 hedge funds’ portfolios at the end of June. There were 25 hedge funds in our database with EVR positions at the end of the previous quarter.

What does smart money think about Evercore Inc. (NYSE:EVR)?

At the end of the second quarter, a total of 26 of the hedge funds tracked by Insider Monkey were bullish on this stock, a change of 4% from the previous quarter. Below, you can check out the change in hedge fund sentiment towards EVR over the last 16 quarters. So, let’s see which hedge funds were among the top holders of the stock and which hedge funds were making big moves. 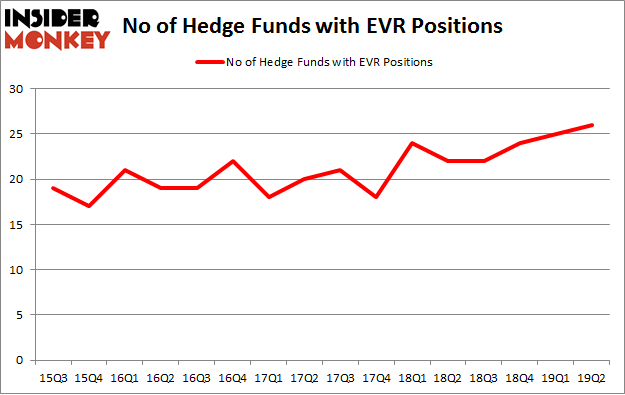 According to Insider Monkey’s hedge fund database, Israel Englander’s Millennium Management has the biggest position in Evercore Inc. (NYSE:EVR), worth close to $108.7 million, amounting to 0.2% of its total 13F portfolio. The second largest stake is held by Ken Griffin of Citadel Investment Group, with a $81.2 million position; less than 0.1%% of its 13F portfolio is allocated to the company. Remaining members of the smart money that are bullish comprise James Parsons’s Junto Capital Management, Renaissance Technologies and Dmitry Balyasny’s Balyasny Asset Management.

Consequently, some big names have jumped into Evercore Inc. (NYSE:EVR) headfirst. Azora Capital, managed by Ravi Chopra, assembled the most valuable position in Evercore Partners Inc. (NYSE:EVR). Azora Capital had $36 million invested in the company at the end of the quarter. Robert Pohly’s Samlyn Capital also made a $21.8 million investment in the stock during the quarter. The following funds were also among the new EVR investors: Peter Seuss’s Prana Capital Management, David Harding’s Winton Capital Management, and Matthew Tewksbury’s Stevens Capital Management.