Insider Monkey has processed numerous 13F filings of hedge funds and famous investors to create an extensive database of hedge fund holdings. The 13F filings show the hedge funds’ and investors’ positions as of the end of the fourth quarter. You can find write-ups about an individual hedge fund’s trades on numerous financial news websites. However, in this article we will take a look at their collective moves and analyze what the smart money thinks of Entergy Corporation (NYSE:ETR) based on that data.

Entergy Corporation (NYSE:ETR) was in 31 hedge funds’ portfolios at the end of the fourth quarter of 2018. ETR has seen an increase in hedge fund interest recently. There were 27 hedge funds in our database with ETR holdings at the end of the previous quarter. Currently the overall hedge fund sentiment towards ETR is at an all time high. This is usually a very bullish signal. For example hedge fund sentiment in Xilinx Inc. (XLNX) was also at its all time high at the beginning of this year and the stock returned more than 46% in 2.5 months. We observed a similar performance from Progressive Corporation (PGR) which returned 27% and outperformed the SPY by nearly 14 percentage points in 2.5 months. Hedge fund sentiment towards IQVIA Holdings Inc. (IQV), Brookfield Asset Management Inc. (BAM), Atlassian Corporation Plc (TEAM), RCL, MTB and CRH hit all time highs at the end of December, and all of these stocks returned more than 20% in the first 2.5 months of this year.

At Q4’s end, a total of 31 of the hedge funds tracked by Insider Monkey were long this stock, a change of 15% from one quarter earlier. Below, you can check out the change in hedge fund sentiment towards ETR over the last 14 quarters. With the smart money’s positions undergoing their usual ebb and flow, there exists an “upper tier” of noteworthy hedge fund managers who were adding to their holdings meaningfully (or already accumulated large positions). 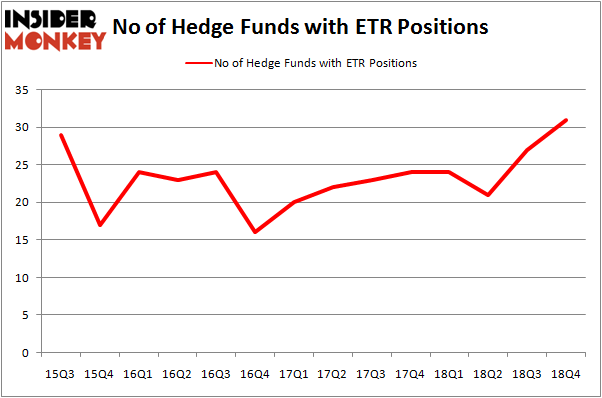 The largest stake in Entergy Corporation (NYSE:ETR) was held by Renaissance Technologies, which reported holding $333.9 million worth of stock at the end of September. It was followed by Citadel Investment Group with a $191.8 million position. Other investors bullish on the company included Millennium Management, Adage Capital Management, and Luminus Management.

As you can see these stocks had an average of 26.25 hedge funds with bullish positions and the average amount invested in these stocks was $758 million. That figure was $1504 million in ETR’s case. Lululemon Athletica inc. (NASDAQ:LULU) is the most popular stock in this table. On the other hand Grifols SA (NASDAQ:GRFS) is the least popular one with only 14 bullish hedge fund positions. Entergy Corporation (NYSE:ETR) is not the most popular stock in this group but hedge fund interest is still above average. Our calculations showed that top 15 most popular stocks among hedge funds returned 19.7% through March 15th and outperformed the S&P 500 ETF (SPY) by 6.6 percentage points. Unfortunately ETR wasn’t in this group. Hedge funds that bet on ETR were disappointed as the stock returned 11% and slightly underperformed the market. If you are interested in investing in large cap stocks, you should check out the top 15 hedge fund stocks as 13 of these outperformed the market.

Hedge Funds Have Never Been This Bullish On International Paper Company (IP...
Monthly Newsletter Strategy
Download a free copy of our newsletter and see the details inside!
Hedge Fund Resource Center
Related News
Hedge Fund and Insider Trading News: Elliott Management, BlueMountain Capital Management, NexPoint Residential Trust Inc (NXRT), Innodata Inc (INOD), and More Hedge Funds Are Crazy About Entergy Corporation (ETR) 50 Best Utility Dividend Stocks To Invest In 3 Utility Stocks That Will Pay You To Invest In Them Should You Buy Entergy Corporation (ETR)? The Smart Money Is Bullish On These 5 Dividend Stocks Hedge Funds Are Buying These 10 Mid-Caps, Part 2 Hedge Funds Have Never Been This Bullish On Visa Inc (V) Ten of the Most Common Addictions 13 African Countries with the Largest White Population in 2018
Billionaire Hedge Funds