Hedge Funds Have Never Been This Bullish On Emerson Electric Co. (EMR)

“The global economic environment is very favorable for investors. Economies are generally strong, but not too strong. Employment levels are among the strongest for many decades. Interest rates are paused at very low levels, and the risk of significant increases in the medium term seems low. Financing for transactions is freely available to good borrowers, but not in major excess. Covenants are lighter than they were five years ago, but the extreme excesses seen in the past do not seem prevalent yet today. Despite this apparent ‘goldilocks’ market environment, we continue to worry about a world where politics are polarized almost everywhere, interest rates are low globally, and equity valuations are at their peak,” are the words of Brookfield Asset Management. Brookfield was right about politics as stocks experienced their second worst May since the 1960s due to escalation of trade disputes. We pay attention to what hedge funds are doing in a particular stock before considering a potential investment because it works for us. So let’s take a glance at the smart money sentiment towards Emerson Electric Co. (NYSE:EMR) and see how it was affected.

Is Emerson Electric Co. (NYSE:EMR) a good stock to buy now? Investors who are in the know are in a bullish mood. The number of bullish hedge fund positions went up by 10 in recent months. Our calculations also showed that EMR isn’t among the 30 most popular stocks among hedge funds.

To most shareholders, hedge funds are assumed to be underperforming, outdated financial vehicles of yesteryear. While there are more than 8000 funds trading at the moment, Our researchers hone in on the upper echelon of this club, around 750 funds. These investment experts command the lion’s share of the smart money’s total asset base, and by watching their unrivaled investments, Insider Monkey has figured out several investment strategies that have historically outpaced Mr. Market. Insider Monkey’s flagship hedge fund strategy beat the S&P 500 index by around 5 percentage points per year since its inception in May 2014 through the end of May. We were able to generate large returns even by identifying short candidates. Our portfolio of short stocks lost 30.9% since February 2017 (through May 30th) even though the market was up nearly 24% during the same period. We just shared a list of 5 short targets in our latest quarterly update and they are already down an average of 11.9% in less than a couple of weeks whereas our long picks outperformed the market by 2 percentage points in this volatile 2 week period.

How have hedgies been trading Emerson Electric Co. (NYSE:EMR)? 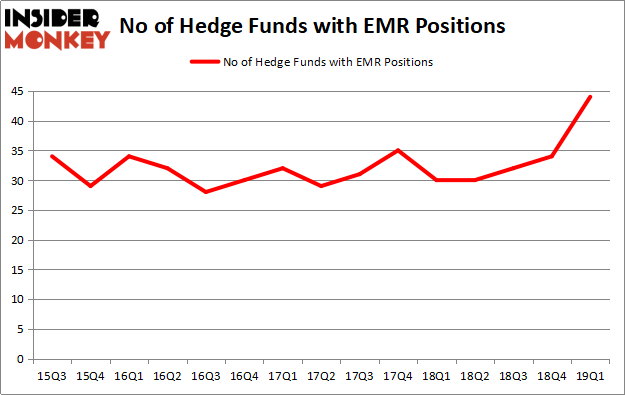 Of the funds tracked by Insider Monkey, Adage Capital Management, managed by Phill Gross and Robert Atchinson, holds the most valuable position in Emerson Electric Co. (NYSE:EMR). Adage Capital Management has a $219.8 million position in the stock, comprising 0.5% of its 13F portfolio. The second largest stake is held by Two Sigma Advisors, managed by John Overdeck and David Siegel, which holds a $194.2 million position; 0.5% of its 13F portfolio is allocated to the company. Other professional money managers that are bullish include Anand Parekh’s Alyeska Investment Group, Cliff Asness’s AQR Capital Management and Israel Englander’s Millennium Management.

As you can see these stocks had an average of 37.75 hedge funds with bullish positions and the average amount invested in these stocks was $4181 million. That figure was $961 million in EMR’s case. Altaba Inc. (NASDAQ:AABA) is the most popular stock in this table. On the other hand Relx PLC (NYSE:RELX) is the least popular one with only 7 bullish hedge fund positions. Emerson Electric Co. (NYSE:EMR) is not the most popular stock in this group but hedge fund interest is still above average. This is a slightly positive signal but we’d rather spend our time researching stocks that hedge funds are piling on. Our calculations showed that top 20 most popular stocks among hedge funds returned 1.9% in Q2 through May 30th and outperformed the S&P 500 ETF (SPY) by more than 3 percentage points. Unfortunately EMR wasn’t nearly as popular as these 20 stocks and hedge funds that were betting on EMR were disappointed as the stock returned -9.9% during the same period and underperformed the market. If you are interested in investing in large cap stocks with huge upside potential, you should check out the top 20 most popular stocks among hedge funds as 13 of these stocks already outperformed the market so far in Q2.