It seems that the masses and most of the financial media hate hedge funds and what they do, but why is this hatred of hedge funds so prominent? At the end of the day, these asset management firms do not gamble the hard-earned money of the people who are on the edge of poverty. Truth be told, most hedge fund managers and other smaller players within this industry are very smart and skilled investors. Of course, they may also make wrong bets in some instances, but no one knows what the future holds and how market participants will react to the bountiful news that floods in each day. The Standard and Poor’s 500 Index returned approximately 5.7% in the 12 months ending October 26 (including dividend payments). Conversely, hedge funds’ 30 preferred S&P 500 stocks (as of June 2018) generated a return of 15.1% during the same 12-month period, with 53% of these stock picks outperforming the broader market benchmark. Coincidence? It might happen to be so, but it is unlikely. Our research covering the last 18 years indicates that hedge funds’ stock picks generate superior risk-adjusted returns. That’s why we believe it isn’t a waste of time to check out hedge fund sentiment before you invest in a stock like Emerson Electric Co. (NYSE:EMR).

Emerson Electric Co. (NYSE:EMR) was in 32 hedge funds’ portfolios at the end of September. EMR has seen an increase in support from the world’s most elite money managers in recent months. There were 30 hedge funds in our database with EMR positions at the end of the previous quarter. Our calculations also showed that EMR isn’t among the 30 most popular stocks among hedge funds.

In the 21st century investor’s toolkit there are a large number of methods stock market investors employ to analyze publicly traded companies. Some of the less utilized methods are hedge fund and insider trading interest. We have shown that, historically, those who follow the best picks of the top hedge fund managers can beat their index-focused peers by a healthy margin (see the details here).

How have hedgies been trading Emerson Electric Co. (NYSE:EMR)?

At Q3’s end, a total of 32 of the hedge funds tracked by Insider Monkey held long positions in this stock, a change of 7% from the previous quarter. Below, you can check out the change in hedge fund sentiment towards EMR over the last 13 quarters. So, let’s find out which hedge funds were among the top holders of the stock and which hedge funds were making big moves. 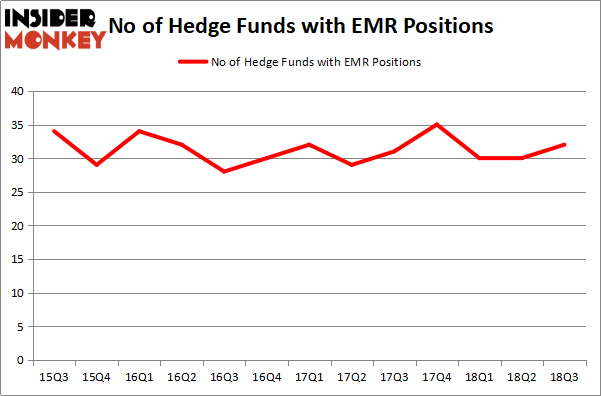 Among these funds, Adage Capital Management held the most valuable stake in Emerson Electric Co. (NYSE:EMR), which was worth $228 million at the end of the third quarter. On the second spot was Alyeska Investment Group which amassed $159.6 million worth of shares. Moreover, Citadel Investment Group, Holocene Advisors, and Element Capital Management were also bullish on Emerson Electric Co. (NYSE:EMR), allocating a large percentage of their portfolios to this stock.

As one would reasonably expect, some big names have jumped into Emerson Electric Co. (NYSE:EMR) headfirst. Holocene Advisors, managed by Brandon Haley, initiated the biggest position in Emerson Electric Co. (NYSE:EMR). Holocene Advisors had $63.1 million invested in the company at the end of the quarter. Matthew Tewksbury’s Stevens Capital Management also made a $10.9 million investment in the stock during the quarter. The other funds with brand new EMR positions are Bruce Kovner’s Caxton Associates LP, Zach Schreiber’s Point State Capital, and Roger Ibbotson’s Zebra Capital Management.

As you can see these stocks had an average of 35.5 hedge funds with bullish positions and the average amount invested in these stocks was $1.88 billion. That figure was $886 million in EMR’s case. General Motors Company (NYSE:GM) is the most popular stock in this table. On the other hand Banco Bradesco SA (NYSE:BBD) is the least popular one with only 14 bullish hedge fund positions. Emerson Electric Co. (NYSE:EMR) is not the least popular stock in this group but hedge fund interest is still below average. This is a slightly negative signal and we’d rather spend our time researching stocks that hedge funds are piling on. In this regard GM might be a better candidate to consider a long position.