Does Emerson Electric Co. (NYSE:EMR) represent a good buying opportunity at the moment? Let’s briefly check the hedge fund interest towards the company. Hedge fund firms constantly search out bright intellectuals and highly-experienced employees and throw away millions of dollars on satellite photos and other research activities, so it is no wonder why they tend to generate millions in profits each year. It is also true that some hedge fund players fail inconceivably on some occasions, but net net their stock picks have been generating superior risk-adjusted returns on average over the years.

Is Emerson Electric Co. (NYSE:EMR) a superb investment now? Investors who are in the know are in an optimistic mood. The number of bullish hedge fund positions went up by 2 recently. Our calculations also showed that EMR isn’t among the 30 most popular stocks among hedge funds. EMR was in 34 hedge funds’ portfolios at the end of December. There were 32 hedge funds in our database with EMR holdings at the end of the previous quarter.

According to most market participants, hedge funds are perceived as underperforming, old financial vehicles of yesteryear. While there are greater than 8000 funds trading at present, Our researchers look at the leaders of this group, approximately 750 funds. Most estimates calculate that this group of people manage bulk of the smart money’s total capital, and by keeping an eye on their best picks, Insider Monkey has formulated many investment strategies that have historically outrun the S&P 500 index. Insider Monkey’s flagship hedge fund strategy outstripped the S&P 500 index by nearly 5 percentage points a year since its inception in May 2014 through early November 2018. We were able to generate large returns even by identifying short candidates. Our portfolio of short stocks lost 27.5% since February 2017 (through March 12th) even though the market was up nearly 25% during the same period. We just shared a list of 6 short targets in our latest quarterly update and they are already down an average of 6% in less than a month.

At Q4’s end, a total of 34 of the hedge funds tracked by Insider Monkey held long positions in this stock, a change of 6% from the second quarter of 2018. The graph below displays the number of hedge funds with bullish position in EMR over the last 14 quarters. With the smart money’s sentiment swirling, there exists a few notable hedge fund managers who were adding to their holdings substantially (or already accumulated large positions). 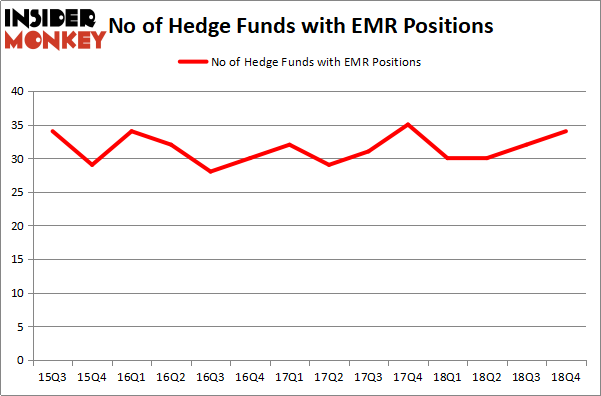 Among these funds, Two Sigma Advisors held the most valuable stake in Emerson Electric Co. (NYSE:EMR), which was worth $184.8 million at the end of the third quarter. On the second spot was Citadel Investment Group which amassed $174 million worth of shares. Moreover, Renaissance Technologies, Arrowstreet Capital, and Alyeska Investment Group were also bullish on Emerson Electric Co. (NYSE:EMR), allocating a large percentage of their portfolios to this stock.

As one would reasonably expect, key hedge funds have been driving this bullishness. Renaissance Technologies, managed by Jim Simons, assembled the largest position in Emerson Electric Co. (NYSE:EMR). Renaissance Technologies had $141.4 million invested in the company at the end of the quarter. Jonathan Barrett and Paul Segal’s Luminus Management also made a $10.5 million investment in the stock during the quarter. The other funds with brand new EMR positions are Steve Cohen’s Point72 Asset Management, Alexander Mitchell’s Scopus Asset Management, and Robert Pohly’s Samlyn Capital.

Let’s now take a look at hedge fund activity in other stocks – not necessarily in the same industry as Emerson Electric Co. (NYSE:EMR) but similarly valued. We will take a look at Marriott International Inc (NASDAQ:MAR), Prologis Inc (NYSE:PLD), American Electric Power Company, Inc. (NYSE:AEP), and The Sherwin-Williams Company (NYSE:SHW). All of these stocks’ market caps are closest to EMR’s market cap.

As you can see these stocks had an average of 36.5 hedge funds with bullish positions and the average amount invested in these stocks was $1329 million. That figure was $945 million in EMR’s case. The Sherwin-Williams Company (NYSE:SHW) is the most popular stock in this table. On the other hand Prologis Inc (NYSE:PLD) is the least popular one with only 30 bullish hedge fund positions. Emerson Electric Co. (NYSE:EMR) is not the least popular stock in this group but hedge fund interest is still below average. This is a slightly negative signal and we’d rather spend our time researching stocks that hedge funds are piling on. Our calculations showed that top 15 most popular stocks among hedge funds returned 19.7% through March 15th and outperformed the S&P 500 ETF (SPY) by 6.6 percentage points. Hedge funds were also right about betting on EMR, though not to the same extent, as the stock returned 13.5% and outperformed the market as well.