After several tireless days we have finished crunching the numbers from nearly 750 13F filings issued by the elite hedge funds and other investment firms that we track at Insider Monkey, which disclosed those firms’ equity portfolios as of June 28. The results of that effort will be put on display in this article, as we share valuable insight into the smart money sentiment towards Duke Energy Corporation (NYSE:DUK).

Duke Energy Corporation (NYSE:DUK) was in 32 hedge funds’ portfolios at the end of June. DUK investors should pay attention to an increase in hedge fund sentiment lately. There were 26 hedge funds in our database with DUK positions at the end of the previous quarter. Our calculations also showed that DUK isn’t among the 30 most popular stocks among hedge funds.

In today’s marketplace there are a lot of formulas stock market investors employ to appraise publicly traded companies. Some of the most underrated formulas are hedge fund and insider trading indicators. Our experts have shown that, historically, those who follow the top picks of the elite hedge fund managers can outpace their index-focused peers by a very impressive margin (see the details here). 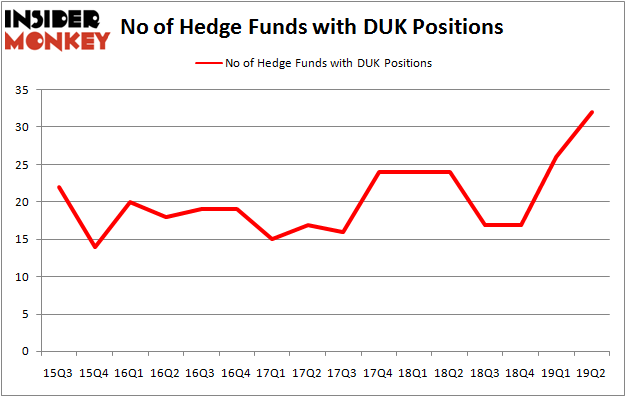 Unlike some fund managers who are betting on Dow reaching 40000 in a year, our long-short investment strategy doesn’t rely on bull markets to deliver double digit returns. We only rely on hedge fund buy/sell signals. We’re going to take a peek at the recent hedge fund action encompassing Duke Energy Corporation (NYSE:DUK).

Heading into the third quarter of 2019, a total of 32 of the hedge funds tracked by Insider Monkey were long this stock, a change of 23% from the first quarter of 2019. The graph below displays the number of hedge funds with bullish position in DUK over the last 16 quarters. With the smart money’s capital changing hands, there exists a few notable hedge fund managers who were upping their holdings substantially (or already accumulated large positions).

Among these funds, Renaissance Technologies held the most valuable stake in Duke Energy Corporation (NYSE:DUK), which was worth $742.9 million at the end of the second quarter. On the second spot was D E Shaw which amassed $148.3 million worth of shares. Moreover, Adage Capital Management, Citadel Investment Group, and Two Sigma Advisors were also bullish on Duke Energy Corporation (NYSE:DUK), allocating a large percentage of their portfolios to this stock.

Consequently, key hedge funds were breaking ground themselves. Adage Capital Management, managed by Phill Gross and Robert Atchinson, assembled the most valuable position in Duke Energy Corporation (NYSE:DUK). Adage Capital Management had $113.8 million invested in the company at the end of the quarter. Steve Cohen’s Point72 Asset Management also made a $36.1 million investment in the stock during the quarter. The other funds with brand new DUK positions are Jos Shaver’s Electron Capital Partners, Clint Carlson’s Carlson Capital, and Jonathan Barrett and Paul Segal’s Luminus Management.

As you can see these stocks had an average of 48.25 hedge funds with bullish positions and the average amount invested in these stocks was $2539 million. That figure was $1626 million in DUK’s case. T-Mobile US, Inc. (NASDAQ:TMUS) is the most popular stock in this table. On the other hand Enterprise Products Partners L.P. (NYSE:EPD) is the least popular one with only 19 bullish hedge fund positions. Duke Energy Corporation (NYSE:DUK) is not the least popular stock in this group but hedge fund interest is still below average though overall hedge fund sentiment towards the stock is at its all time high. Our calculations showed that top 20 most popular stocks among hedge funds returned 24.4% in 2019 through September 30th and outperformed the S&P 500 ETF (SPY) by 4 percentage points. Hedge funds were also right about betting on DUK as the stock returned 9.8% during the same time frame and outperformed the market by an even larger margin.