Hedge Funds Have Never Been This Bullish On Dropbox, Inc. (DBX)

As we already know from media reports and hedge fund investor letters, hedge funds delivered their best returns in a decade. Most investors who decided to stick with hedge funds after a rough 2018 recouped their losses by the end of the second quarter. We get to see hedge funds’ thoughts towards the market and individual stocks by aggregating their quarterly portfolio movements and reading their investor letters. In this article, we will particularly take a look at what hedge funds think about Dropbox, Inc. (NASDAQ:DBX).

Is Dropbox, Inc. (NASDAQ:DBX) ready to rally soon? Investors who are in the know are buying. The number of long hedge fund positions moved up by 10 lately. Our calculations also showed that DBX isn’t among the 30 most popular stocks among hedge funds (see the video below).

Unlike this former hedge fund manager who is convinced Dow will soar past 40000, our long-short investment strategy doesn’t rely on bull markets to deliver double digit returns. We only rely on hedge fund buy/sell signals. We’re going to take a peek at the key hedge fund action encompassing Dropbox, Inc. (NASDAQ:DBX).

How have hedgies been trading Dropbox, Inc. (NASDAQ:DBX)? 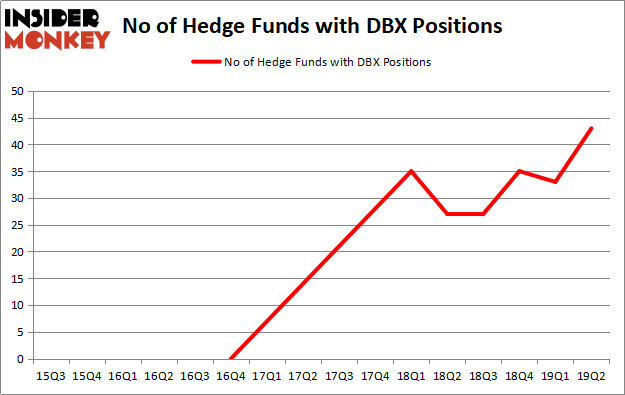 More specifically, Renaissance Technologies was the largest shareholder of Dropbox, Inc. (NASDAQ:DBX), with a stake worth $163.8 million reported as of the end of March. Trailing Renaissance Technologies was D E Shaw, which amassed a stake valued at $84.4 million. Two Sigma Advisors, Hunt Lane Capital, and Southpoint Capital Advisors were also very fond of the stock, giving the stock large weights in their portfolios.

With a general bullishness amongst the heavyweights, key hedge funds have been driving this bullishness. Southpoint Capital Advisors, managed by John Smith Clark, assembled the largest position in Dropbox, Inc. (NASDAQ:DBX). Southpoint Capital Advisors had $58.9 million invested in the company at the end of the quarter. Anand Parekh’s Alyeska Investment Group also initiated a $58.5 million position during the quarter. The other funds with new positions in the stock are Brandon Haley’s Holocene Advisors, Gil Simon’s SoMa Equity Partners, and Dmitry Balyasny’s Balyasny Asset Management.

As you can see these stocks had an average of 21 hedge funds with bullish positions and the average amount invested in these stocks was $916 million. That figure was $919 million in DBX’s case. CF Industries Holdings, Inc. (NYSE:CF) is the most popular stock in this table. On the other hand AEGON N.V. (NYSE:AEG) is the least popular one with only 9 bullish hedge fund positions. Compared to these stocks Dropbox, Inc. (NASDAQ:DBX) is more popular among hedge funds. Our calculations showed that top 20 most popular stocks among hedge funds returned 24.4% in 2019 through September 30th and outperformed the S&P 500 ETF (SPY) by 4 percentage points. Unfortunately DBX wasn’t nearly as popular as these 20 stocks and hedge funds that were betting on DBX were disappointed as the stock returned -19.5% during the third quarter and underperformed the market. If you are interested in investing in large cap stocks with huge upside potential, you should check out the top 20 most popular stocks among hedge funds as many of these stocks already outperformed the market in Q3.