Hedge Funds Have Never Been This Bullish On CryoPort, Inc. (CYRX)

We are still in an overall bull market and many stocks that smart money investors were piling into surged through October 17th. Among them, Facebook and Microsoft ranked among the top 3 picks and these stocks gained 45% and 39% respectively. Hedge funds’ top 3 stock picks returned 34.4% this year and beat the S&P 500 ETFs by 13 percentage points. Investing in index funds guarantees you average returns, not superior returns. We are looking to generate superior returns for our readers. That’s why we believe it isn’t a waste of time to check out hedge fund sentiment before you invest in a stock like CryoPort, Inc. (NASDAQ:CYRX).

Is CryoPort, Inc. (NASDAQ:CYRX) ready to rally soon? Money managers are getting more bullish. The number of long hedge fund positions moved up by 4 lately. Our calculations also showed that CYRX isn’t among the 30 most popular stocks among hedge funds (see the video below). CYRX was in 11 hedge funds’ portfolios at the end of the second quarter of 2019. There were 7 hedge funds in our database with CYRX holdings at the end of the previous quarter. 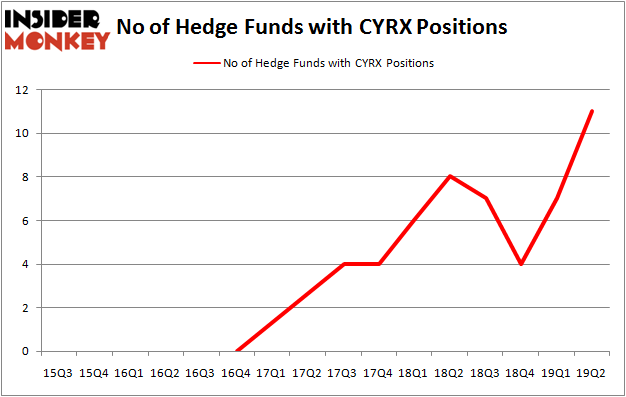 At the end of the second quarter, a total of 11 of the hedge funds tracked by Insider Monkey were long this stock, a change of 57% from the first quarter of 2019. Below, you can check out the change in hedge fund sentiment towards CYRX over the last 16 quarters. So, let’s see which hedge funds were among the top holders of the stock and which hedge funds were making big moves.

The largest stake in CryoPort, Inc. (NASDAQ:CYRX) was held by Millennium Management, which reported holding $5.3 million worth of stock at the end of March. It was followed by Royce & Associates with a $4.4 million position. Other investors bullish on the company included Driehaus Capital, D E Shaw, and OZ Management.

With a general bullishness amongst the heavyweights, key money managers were leading the bulls’ herd. Alyeska Investment Group, managed by Anand Parekh, established the most outsized position in CryoPort, Inc. (NASDAQ:CYRX). Alyeska Investment Group had $0.5 million invested in the company at the end of the quarter. Louis Bacon’s Moore Global Investments also made a $0.4 million investment in the stock during the quarter. The other funds with new positions in the stock are Paul Marshall and Ian Wace’s Marshall Wace LLP and Michael Gelband’s ExodusPoint Capital.

As you can see these stocks had an average of 11.75 hedge funds with bullish positions and the average amount invested in these stocks was $106 million. That figure was $17 million in CYRX’s case. Myers Industries, Inc. (NYSE:MYE) is the most popular stock in this table. On the other hand Gladstone Commercial Corporation (NASDAQ:GOOD) is the least popular one with only 5 bullish hedge fund positions. CryoPort, Inc. (NASDAQ:CYRX) is not the least popular stock in this group but hedge fund interest is still below average. This is a slightly negative signal and we’d rather spend our time researching stocks that hedge funds are piling on. Our calculations showed that top 20 most popular stocks among hedge funds returned 24.4% in 2019 through September 30th and outperformed the S&P 500 ETF (SPY) by 4 percentage points. Unfortunately CYRX wasn’t nearly as popular as these 20 stocks (hedge fund sentiment was quite bearish); CYRX investors were disappointed as the stock returned -10.7% during the third quarter and underperformed the market. If you are interested in investing in large cap stocks with huge upside potential, you should check out the top 20 most popular stocks among hedge funds as many of these stocks already outperformed the market so far in 2019.

Did Hedge Funds Drop The Ball On Stamps.com Inc. (STMP) ?
Monthly Newsletter Strategy
Download a free copy of our newsletter and see the details inside!
Hedge Fund Resource Center
Related News
What Is Happening In Financial Markets Today? What is Going on With CryoPort Inc (CYRX)? Why These Five Stocks Are Trading Higher Today 11 Largest Auto Insurance Companies In The US In 2019 10 Poorest Cities in America in 2019 8 Lowest Tar and Nicotine Cigarette Brands in 2019
Billionaire Hedge Funds