The 700+ hedge funds and money managers tracked by Insider Monkey have already compiled and submitted their 13F filings for the fourth quarter, which unveil their equity positions as of December 31. We went through these filings, fixed typos and other more significant errors and identified the changes in hedge fund positions. Our extensive review of these public filings is finally over, so this article is set to reveal the smart money sentiment towards Community Bank System, Inc. (NYSE:CBU).

Is Community Bank System, Inc. (NYSE:CBU) worth your attention right now? The best stock pickers are buying. The number of long hedge fund positions moved up by 2 recently. Our calculations also showed that CBU isn’t among the 30 most popular stocks among hedge funds. CBU was in 11 hedge funds’ portfolios at the end of the fourth quarter of 2018. There were 9 hedge funds in our database with CBU holdings at the end of the previous quarter.

At Q4’s end, a total of 11 of the hedge funds tracked by Insider Monkey were bullish on this stock, a change of 22% from one quarter earlier. On the other hand, there were a total of 4 hedge funds with a bullish position in CBU a year ago. With the smart money’s sentiment swirling, there exists a select group of key hedge fund managers who were upping their stakes significantly (or already accumulated large positions). 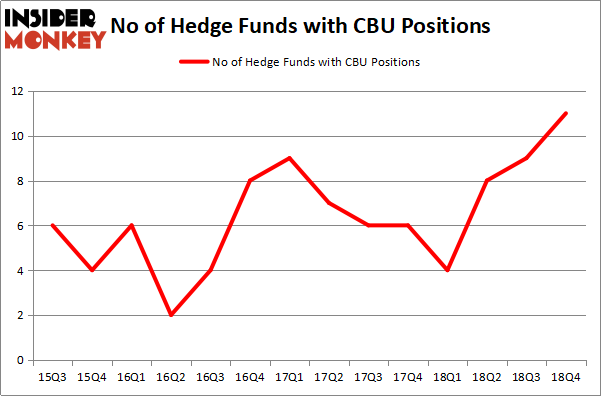 The largest stake in Community Bank System, Inc. (NYSE:CBU) was held by Renaissance Technologies, which reported holding $5.9 million worth of stock at the end of September. It was followed by Balyasny Asset Management with a $5.1 million position. Other investors bullish on the company included Citadel Investment Group, Millennium Management, and GLG Partners.

As one would reasonably expect, specific money managers have jumped into Community Bank System, Inc. (NYSE:CBU) headfirst. ExodusPoint Capital, managed by Michael Gelband, established the most outsized position in Community Bank System, Inc. (NYSE:CBU). ExodusPoint Capital had $0.4 million invested in the company at the end of the quarter. Cliff Asness’s AQR Capital Management also made a $0.3 million investment in the stock during the quarter. The only other fund with a brand new CBU position is Gavin Saitowitz and Cisco J. del Valle’s Springbok Capital.

As you can see these stocks had an average of 14.75 hedge funds with bullish positions and the average amount invested in these stocks was $289 million. That figure was $23 million in CBU’s case. Platform Specialty Products Corporation (NYSE:PAH) is the most popular stock in this table. On the other hand Stifel Financial Corp. (NYSE:SF) is the least popular one with only 12 bullish hedge fund positions. Compared to these stocks Community Bank System, Inc. (NYSE:CBU) is even less popular than SF. Hedge funds dodged a bullet by taking a bearish stance towards CBU. Our calculations showed that the top 15 most popular hedge fund stocks returned 24.2% through April 22nd and outperformed the S&P 500 ETF (SPY) by more than 7 percentage points. Unfortunately CBU wasn’t nearly as popular as these 15 stock (hedge fund sentiment was very bearish); CBU investors were disappointed as the stock returned 11% and underperformed the market. If you are interested in investing in large cap stocks with huge upside potential, you should check out the top 15 most popular stocks) among hedge funds as 13 of these stocks already outperformed the market this year.