Hedge Funds Have Never Been This Bullish On Automatic Data Processing, Inc. (ADP)

We know that hedge funds generate strong, risk-adjusted returns over the long run, therefore imitating the picks that they are collectively bullish on can be a profitable strategy for retail investors. With billions of dollars in assets, smart money investors have to conduct complex analyses, spend many resources and use tools that are not always available for the general crowd. This doesn’t mean that they don’t have occasional colossal losses; they do (like Peltz’s recent General Electric losses). However, it is still a good idea to keep an eye on hedge fund activity. With this in mind, as the current round of 13F filings has just ended, let’s examine the smart money sentiment towards Automatic Data Processing, Inc. (NASDAQ:ADP).

Is Automatic Data Processing, Inc. (NASDAQ:ADP) a bargain? Money managers are betting on the stock. The number of long hedge fund positions improved by 6 lately. Our calculations also showed that ADP isn’t among the 30 most popular stocks among hedge funds (see the video below).

Unlike the largest US hedge funds that are convinced Dow will soar past 40,000 or the world’s most bearish hedge fund that’s more convinced than ever that a crash is coming, our long-short investment strategy doesn’t rely on bull or bear markets to deliver double digit returns. We only rely on the best performing hedge funds‘ buy/sell signals. We’re going to analyze the new hedge fund action encompassing Automatic Data Processing, Inc. (NASDAQ:ADP).

At the end of the third quarter, a total of 49 of the hedge funds tracked by Insider Monkey were bullish on this stock, a change of 14% from the previous quarter. By comparison, 35 hedge funds held shares or bullish call options in ADP a year ago. With hedge funds’ sentiment swirling, there exists an “upper tier” of noteworthy hedge fund managers who were boosting their holdings substantially (or already accumulated large positions). 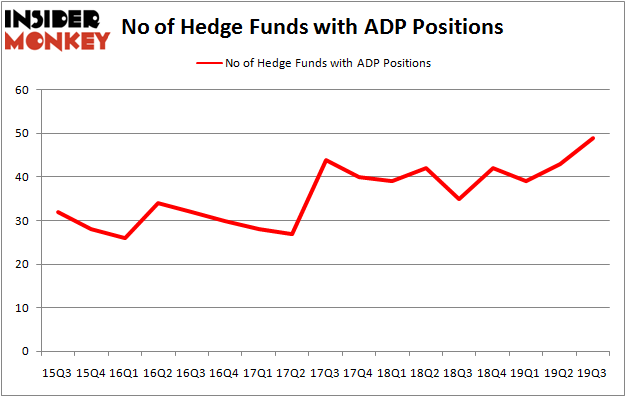 The largest stake in Automatic Data Processing, Inc. (NASDAQ:ADP) was held by Cedar Rock Capital, which reported holding $483.4 million worth of stock at the end of September. It was followed by Arrowstreet Capital with a $388.4 million position. Other investors bullish on the company included D E Shaw, Generation Investment Management, and Two Sigma Advisors. In terms of the portfolio weights assigned to each position Cedar Rock Capital allocated the biggest weight to Automatic Data Processing, Inc. (NASDAQ:ADP), around 11.2% of its portfolio. BlueSpruce Investments is also relatively very bullish on the stock, earmarking 8.12 percent of its 13F equity portfolio to ADP.

With a general bullishness amongst the heavyweights, some big names were breaking ground themselves. BlueSpruce Investments, managed by Tim Hurd and Ed Magnus, established the biggest position in Automatic Data Processing, Inc. (NASDAQ:ADP). BlueSpruce Investments had $211.1 million invested in the company at the end of the quarter. Michael Kharitonov and Jon David McAuliffe’s Voleon Capital also made a $15 million investment in the stock during the quarter. The other funds with new positions in the stock are Peter Seuss’s Prana Capital Management, Perella Weinberg Partners, and Ray Dalio’s Bridgewater Associates.

As you can see these stocks had an average of 33 hedge funds with bullish positions and the average amount invested in these stocks was $1262 million. That figure was $3101 million in ADP’s case. Intuit Inc. (NASDAQ:INTU) is the most popular stock in this table. On the other hand The Bank of Nova Scotia (NYSE:BNS) is the least popular one with only 15 bullish hedge fund positions. Compared to these stocks Automatic Data Processing, Inc. (NASDAQ:ADP) is more popular among hedge funds. Our calculations showed that top 20 most popular stocks among hedge funds returned 34.7% in 2019 through November 22nd and outperformed the S&P 500 ETF (SPY) by 8.5 percentage points. Hedge funds were also right about betting on ADP, though not to the same extent, as the stock returned 5.1% during the fourth quarter (through 11/22) and outperformed the market as well.