Hedge Funds Have Never Been This Bullish On Arena Pharmaceuticals, Inc. (ARNA)

At Insider Monkey, we pore over the filings of nearly 750 top investment firms every quarter, a process we have now completed for the latest reporting period. The data we’ve gathered as a result gives us access to a wealth of collective knowledge based on these firms’ portfolio holdings as of June 28. In this article, we will use that wealth of knowledge to determine whether or not Arena Pharmaceuticals, Inc. (NASDAQ:ARNA) makes for a good investment right now.

Arena Pharmaceuticals, Inc. (NASDAQ:ARNA) has experienced an increase in hedge fund interest in recent months. ARNA was in 29 hedge funds’ portfolios at the end of June. There were 22 hedge funds in our database with ARNA holdings at the end of the previous quarter. Our calculations also showed that ARNA isn’t among the 30 most popular stocks among hedge funds (view the video below).

If you’d ask most stock holders, hedge funds are perceived as worthless, outdated financial vehicles of years past. While there are over 8000 funds trading today, Our researchers hone in on the upper echelon of this group, approximately 750 funds. These money managers handle the majority of all hedge funds’ total asset base, and by observing their inimitable stock picks, Insider Monkey has formulated a number of investment strategies that have historically outrun the S&P 500 index. Insider Monkey’s flagship hedge fund strategy beat the S&P 500 index by around 5 percentage points a year since its inception in May 2014. We were able to generate large returns even by identifying short candidates. Our portfolio of short stocks lost 25.7% since February 2017 (through September 30th) even though the market was up more than 33% during the same period. We just shared a list of 10 short targets in our latest quarterly update .

Heading into the third quarter of 2019, a total of 29 of the hedge funds tracked by Insider Monkey were long this stock, a change of 32% from the previous quarter. The graph below displays the number of hedge funds with bullish position in ARNA over the last 16 quarters. With the smart money’s sentiment swirling, there exists an “upper tier” of notable hedge fund managers who were upping their holdings substantially (or already accumulated large positions). 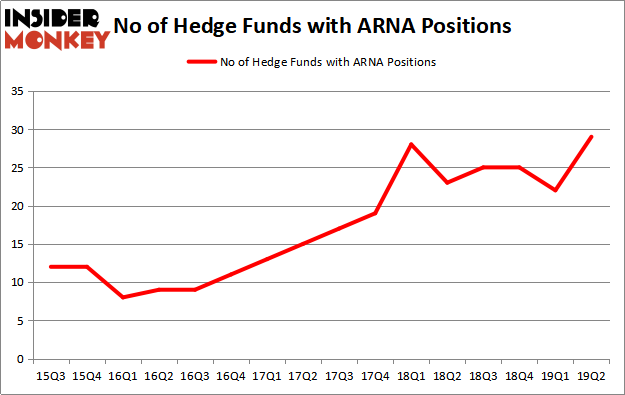 More specifically, Partner Fund Management was the largest shareholder of Arena Pharmaceuticals, Inc. (NASDAQ:ARNA), with a stake worth $107.2 million reported as of the end of March. Trailing Partner Fund Management was Perceptive Advisors, which amassed a stake valued at $80.9 million. Alyeska Investment Group, Citadel Investment Group, and Atika Capital were also very fond of the stock, giving the stock large weights in their portfolios.

As one would reasonably expect, key hedge funds were breaking ground themselves. OrbiMed Advisors, managed by Samuel Isaly, created the most outsized position in Arena Pharmaceuticals, Inc. (NASDAQ:ARNA). OrbiMed Advisors had $6.4 million invested in the company at the end of the quarter. Steve Cohen’s Point72 Asset Management also made a $5.3 million investment in the stock during the quarter. The following funds were also among the new ARNA investors: Peter Rathjens, Bruce Clarke and John Campbell’s Arrowstreet Capital, Israel Englander’s Millennium Management, and Israel Englander’s Millennium Management.