Before we spend countless hours researching a company, we like to analyze what insiders, hedge funds and billionaire investors think of the stock first. This is a necessary first step in our investment process because our research has shown that the elite investors’ consensus returns have been exceptional. In the following paragraphs, we find out what the billionaire investors and hedge funds think of Anadarko Petroleum Corporation (NYSE:APC).

Is Anadarko Petroleum Corporation (NYSE:APC) a bargain? Money managers are taking a bullish view. The number of long hedge fund bets improved by 27 in recent months. Our calculations also showed that APC is among the 30 most popular stocks among hedge funds. APC was in 77 hedge funds’ portfolios at the end of June. There were 50 hedge funds in our database with APC positions at the end of the previous quarter.

Today there are numerous methods stock traders put to use to appraise stocks. Some of the less utilized methods are hedge fund and insider trading signals. Our experts have shown that, historically, those who follow the top picks of the top fund managers can outclass the market by a significant amount (see the details here). Unlike some fund managers who are betting on Dow reaching 40000 in a year, our long-short investment strategy outperformed the broader market indices in down markets as well.

Unlike some fund managers who are betting on Dow reaching 40000 in a year, our long-short investment strategy doesn’t rely on bull markets to deliver double digit returns. We only rely on hedge fund buy/sell signals. We’re going to take a look at the latest hedge fund action surrounding Anadarko Petroleum Corporation (NYSE:APC).

How have hedgies been trading Anadarko Petroleum Corporation (NYSE:APC)?

Heading into the third quarter of 2019, a total of 77 of the hedge funds tracked by Insider Monkey were bullish on this stock, a change of 54% from the first quarter of 2019. By comparison, 48 hedge funds held shares or bullish call options in APC a year ago. With hedge funds’ sentiment swirling, there exists an “upper tier” of noteworthy hedge fund managers who were increasing their holdings substantially (or already accumulated large positions). 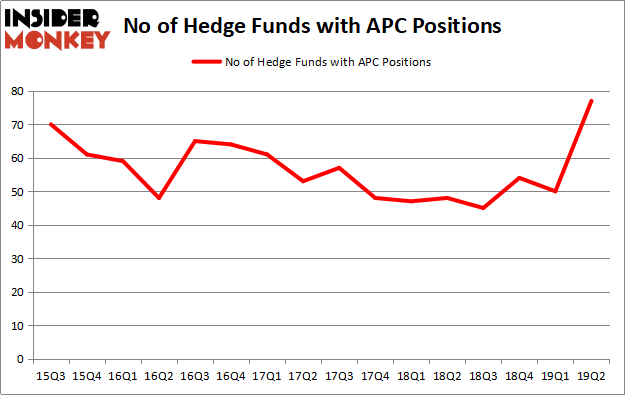 Of the funds tracked by Insider Monkey, Adage Capital Management, managed by Phill Gross and Robert Atchinson, holds the number one position in Anadarko Petroleum Corporation (NYSE:APC). Adage Capital Management has a $780.6 million position in the stock, comprising 1.9% of its 13F portfolio. Coming in second is Farallon Capital, founded by Thomas Steyer, which holds a $738.4 million position; the fund has 6.1% of its 13F portfolio invested in the stock. Some other peers with similar optimism include Matthew Halbower’s Pentwater Capital Management, D. E. Shaw’s D E Shaw and Ken Griffin’s Citadel Investment Group.

As you can see these stocks had an average of 37.25 hedge funds with bullish positions and the average amount invested in these stocks was $2195 million. That figure was $7592 million in APC’s case. Humana Inc (NYSE:HUM) is the most popular stock in this table. On the other hand Canadian Imperial Bank of Commerce (NYSE:CM) is the least popular one with only 12 bullish hedge fund positions. Compared to these stocks Anadarko Petroleum Corporation (NYSE:APC) is more popular among hedge funds. Our calculations showed that top 20 most popular stocks among hedge funds returned 24.4% in 2019 through September 30th and outperformed the S&P 500 ETF (SPY) by 4 percentage points. Hedge funds were also right about betting on APC, though not to the same extent, as the stock returned 3.1% during the third quarter and outperformed the market as well.

Chevron, Conduent, Flexion, and More: Stocks in the Spotlight