Hedge Funds Have Never Been This Bullish On Ameren Corporation (AEE)

We at Insider Monkey have gone over 700 13F filings that hedge funds and prominent investors are required to file by the SEC The 13F filings show the funds’ and investors’ portfolio positions as of December 31st. In this article, we look at what those funds think of Ameren Corporation (NYSE:AEE) based on that data.

Ameren Corporation (NYSE:AEE) shareholders have witnessed an increase in hedge fund interest in recent months. Overall hedge fund sentiment towards AEE is currently at its all time high. This is usually a very bullish signal. For example hedge fund sentiment in Xilinx Inc. (XLNX) was also at its all time high at the beginning of this year and the stock returned more than 46% in 2.5 months. We observed a similar performance from Progressive Corporation (PGR) which returned 27% and outperformed the SPY by nearly 14 percentage points in 2.5 months. Hedge fund sentiment towards IQVIA Holdings Inc. (IQV), Brookfield Asset Management Inc. (BAM), Atlassian Corporation Plc (TEAM), RCL, MTB and CRH hit all time highs at the end of December, and all of these stocks returned more than 20% in the first 2.5 months of this year.

What does the smart money think about Ameren Corporation (NYSE:AEE)? 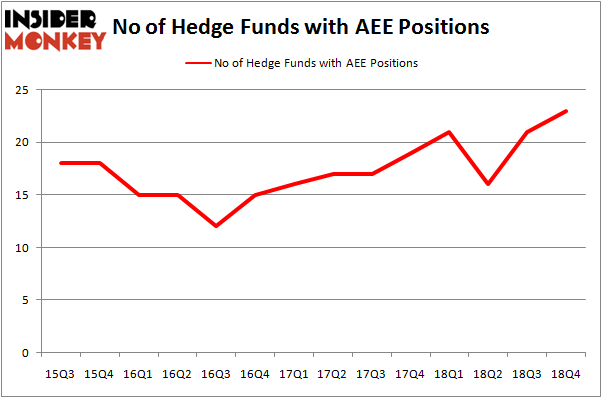 According to publicly available hedge fund and institutional investor holdings data compiled by Insider Monkey, Jim Simons’s Renaissance Technologies has the biggest position in Ameren Corporation (NYSE:AEE), worth close to $316.8 million, comprising 0.3% of its total 13F portfolio. The second most bullish fund manager is AQR Capital Management, managed by Cliff Asness, which holds a $190.8 million position; 0.2% of its 13F portfolio is allocated to the company. Some other professional money managers that are bullish consist of Dmitry Balyasny’s Balyasny Asset Management, Israel Englander’s Millennium Management and John Overdeck and David Siegel’s Two Sigma Advisors.

With a general bullishness amongst the heavyweights, some big names were leading the bulls’ herd. Balyasny Asset Management, managed by Dmitry Balyasny, initiated the largest position in Ameren Corporation (NYSE:AEE). Balyasny Asset Management had $22.8 million invested in the company at the end of the quarter. Bruce Kovner’s Caxton Associates LP also initiated a $7.7 million position during the quarter. The other funds with brand new AEE positions are Michael Gelband’s ExodusPoint Capital, Ray Dalio’s Bridgewater Associates, and Joel Greenblatt’s Gotham Asset Management.

As you can see these stocks had an average of 33.5 hedge funds with bullish positions and the average amount invested in these stocks was $949 million. That figure was $638 million in AEE’s case. First Data Corporation (NYSE:FDC) is the most popular stock in this table. On the other hand W.W. Grainger, Inc. (NYSE:GWW) is the least popular one with only 23 bullish hedge fund positions. Compared to these stocks Ameren Corporation (NYSE:AEE) is even less popular than GWW. Our calculations showed that top 15 most popular stocks among hedge funds returned 19.7% through March 15th and outperformed the S&P 500 ETF (SPY) by 6.6 percentage points. Unfortunately AEE wasn’t in this group. Hedge funds that bet on AEE were disappointed as the stock returned 12.7% and underperformed the market by a small margin. If you are interested in investing in large cap stocks, you should check out the top 15 hedge fund stocks as 13 of these outperformed the market.