Hedge funds and large money managers usually invest with a focus on the long-term horizon and, therefore, short-lived dips or bumps on the charts, usually don’t make them change their opinion towards a company. This time it may be different. During the fourth quarter of 2018 we observed increased volatility and a 20% drop in stock prices. Things completely reversed in 2019 and stock indices hit record highs. Recent hedge fund investor letters indicated that they are cutting their overall exposure, closing out some position and doubling down on others. Let’s take a look at the hedge fund sentiment towards Tradeweb Markets Inc. (NASDAQ:TW) to find out whether it was one of their high conviction long-term ideas.

Tradeweb Markets Inc. (NASDAQ:TW) shares haven’t seen a lot of action during the third quarter. Overall, hedge fund sentiment was unchanged. The stock was in 37 hedge funds’ portfolios at the end of September. The level and the change in hedge fund popularity aren’t the only variables you need to analyze to decipher hedge funds’ perspectives. A stock may witness a boost in popularity but it may still be less popular than similarly priced stocks. That’s why at the end of this article we will examine companies such as Gaming and Leisure Properties Inc (NASDAQ:GLPI), National Oilwell Varco, Inc. (NYSE:NOV), and Under Armour Inc (NYSE:UA) to gather more data points. Our calculations also showed that TW isn’t among the 30 most popular stocks among hedge funds (click for Q3 rankings and see the video below for Q2 rankings).

Unlike the largest US hedge funds that are convinced Dow will soar past 40,000 or the world’s most bearish hedge fund that’s more convinced than ever that a crash is coming, our long-short investment strategy doesn’t rely on bull or bear markets to deliver double digit returns. We only rely on the best performing hedge funds‘ buy/sell signals. We’re going to go over the recent hedge fund action regarding Tradeweb Markets Inc. (NASDAQ:TW).

How have hedgies been trading Tradeweb Markets Inc. (NASDAQ:TW)?

Heading into the fourth quarter of 2019, a total of 37 of the hedge funds tracked by Insider Monkey were bullish on this stock, a change of 0% from one quarter earlier. Below, you can check out the change in hedge fund sentiment towards TW over the last 17 quarters. So, let’s find out which hedge funds were among the top holders of the stock and which hedge funds were making big moves. 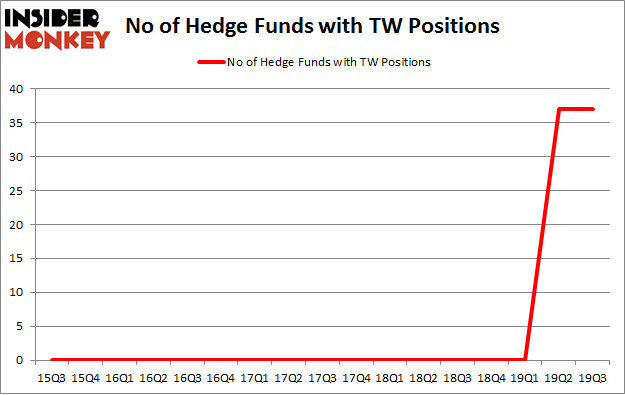 Of the funds tracked by Insider Monkey, Alkeon Capital Management, managed by Panayotis Takis Sparaggis, holds the most valuable position in Tradeweb Markets Inc. (NASDAQ:TW). Alkeon Capital Management has a $53 million position in the stock, comprising 0.2% of its 13F portfolio. The second largest stake is held by Sirios Capital Management, led by John Brennan, holding a $37.7 million position; the fund has 2.5% of its 13F portfolio invested in the stock. Some other professional money managers that are bullish consist of Doug Silverman and Alexander Klabin’s Senator Investment Group, James Parsons’s Junto Capital Management and Philippe Laffont’s Coatue Management. In terms of the portfolio weights assigned to each position Diker Management allocated the biggest weight to Tradeweb Markets Inc. (NASDAQ:TW), around 4.54% of its portfolio. Azora Capital is also relatively very bullish on the stock, designating 3.69 percent of its 13F equity portfolio to TW.

Due to the fact that Tradeweb Markets Inc. (NASDAQ:TW) has witnessed falling interest from the aggregate hedge fund industry, logic holds that there were a few money managers who sold off their entire stakes heading into Q4. It’s worth mentioning that James Dinan’s York Capital Management sold off the biggest investment of the “upper crust” of funds tracked by Insider Monkey, worth an estimated $17.5 million in stock, and Louis Bacon’s Moore Global Investments was right behind this move, as the fund sold off about $14.6 million worth. These bearish behaviors are interesting, as total hedge fund interest stayed the same (this is a bearish signal in our experience).

As you can see these stocks had an average of 29 hedge funds with bullish positions and the average amount invested in these stocks was $754 million. That figure was $401 million in TW’s case. Under Armour Inc (NYSE:UA) is the most popular stock in this table. On the other hand National Oilwell Varco, Inc. (NYSE:NOV) is the least popular one with only 23 bullish hedge fund positions. Compared to these stocks Tradeweb Markets Inc. (NASDAQ:TW) is more popular among hedge funds. Our calculations showed that top 20 most popular stocks among hedge funds returned 37.4% in 2019 through the end of November and outperformed the S&P 500 ETF (SPY) by 9.9 percentage points. Hedge funds were also right about betting on TW as the stock returned 21% during the first two months of Q4 and outperformed the market by an even larger margin. Hedge funds were clearly right about piling into this stock relative to other stocks with similar market capitalizations.