Is Sunstone Hotel Investors Inc (NYSE:SHO) a good place to invest some of your money right now? We can gain invaluable insight to help us answer that question by studying the investment trends of top investors, who employ world-class Ivy League graduates, who are given immense resources and industry contacts to put their financial expertise to work. The top picks of these firms have historically outperformed the market when we account for known risk factors, making them very valuable investment ideas.

Sunstone Hotel Investors Inc (NYSE:SHO) shares haven’t seen a lot of action during the third quarter. Overall, hedge fund sentiment was unchanged. The stock was in 21 hedge funds’ portfolios at the end of September. At the end of this article we will also compare SHO to other stocks including Appian Corporation (NASDAQ:APPN), Olin Corporation (NYSE:OLN), and Agree Realty Corporation (NYSE:ADC) to get a better sense of its popularity.

In the eyes of most traders, hedge funds are assumed to be worthless, old investment tools of years past. While there are greater than 8000 funds in operation at present, We look at the leaders of this club, about 750 funds. It is estimated that this group of investors command the majority of all hedge funds’ total asset base, and by observing their matchless picks, Insider Monkey has come up with a number of investment strategies that have historically outrun the market. Insider Monkey’s flagship short hedge fund strategy defeated the S&P 500 short ETFs by around 20 percentage points a year since its inception in May 2014. Our portfolio of short stocks lost 27.8% since February 2017 (through November 21st) even though the market was up more than 39% during the same period. We just shared a list of 7 short targets in our latest quarterly update .

Unlike the largest US hedge funds that are convinced Dow will soar past 40,000 or the world’s most bearish hedge fund that’s more convinced than ever that a crash is coming, our long-short investment strategy doesn’t rely on bull or bear markets to deliver double digit returns. We only rely on the best performing hedge funds‘ buy/sell signals. Let’s take a look at the new hedge fund action encompassing Sunstone Hotel Investors Inc (NYSE:SHO).

At the end of the third quarter, a total of 21 of the hedge funds tracked by Insider Monkey were bullish on this stock, a change of 0% from one quarter earlier. Below, you can check out the change in hedge fund sentiment towards SHO over the last 17 quarters. With hedge funds’ positions undergoing their usual ebb and flow, there exists a select group of noteworthy hedge fund managers who were increasing their stakes substantially (or already accumulated large positions). 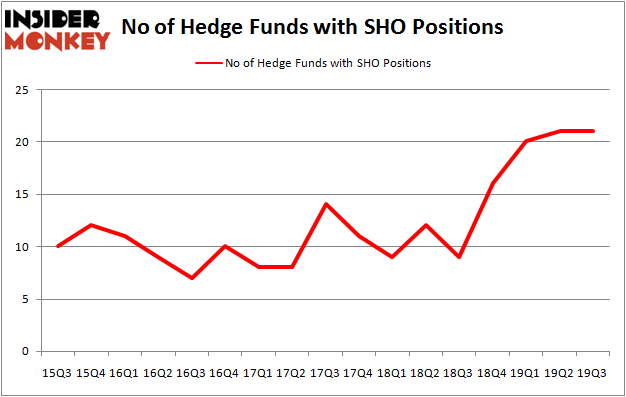 More specifically, Renaissance Technologies was the largest shareholder of Sunstone Hotel Investors Inc (NYSE:SHO), with a stake worth $79 million reported as of the end of September. Trailing Renaissance Technologies was Millennium Management, which amassed a stake valued at $42.5 million. Echo Street Capital Management, Balyasny Asset Management, and Two Sigma Advisors were also very fond of the stock, becoming one of the largest hedge fund holders of the company. In terms of the portfolio weights assigned to each position Neo Ivy Capital allocated the biggest weight to Sunstone Hotel Investors Inc (NYSE:SHO), around 0.8% of its 13F portfolio. Echo Street Capital Management is also relatively very bullish on the stock, earmarking 0.61 percent of its 13F equity portfolio to SHO.

Seeing as Sunstone Hotel Investors Inc (NYSE:SHO) has experienced a decline in interest from the smart money, it’s easy to see that there were a few money managers who sold off their entire stakes in the third quarter. It’s worth mentioning that John Khoury’s Long Pond Capital cut the largest investment of the 750 funds monitored by Insider Monkey, totaling an estimated $40.3 million in stock. Paul Singer’s fund, Elliott Management, also said goodbye to its stock, about $9.8 million worth. These bearish behaviors are intriguing to say the least, as aggregate hedge fund interest stayed the same (this is a bearish signal in our experience).

As you can see these stocks had an average of 19.25 hedge funds with bullish positions and the average amount invested in these stocks was $359 million. That figure was $222 million in SHO’s case. Olin Corporation (NYSE:OLN) is the most popular stock in this table. On the other hand Agree Realty Corporation (NYSE:ADC) is the least popular one with only 9 bullish hedge fund positions. Sunstone Hotel Investors Inc (NYSE:SHO) is not the most popular stock in this group but hedge fund interest is still above average. This is a slightly positive signal but we’d rather spend our time researching stocks that hedge funds are piling on. Our calculations showed that top 20 most popular stocks among hedge funds returned 37.4% in 2019 through the end of November and outperformed the S&P 500 ETF (SPY) by 9.9 percentage points. Unfortunately SHO wasn’t nearly as popular as these 20 stocks and hedge funds that were betting on SHO were disappointed as the stock returned 1.9% during the fourth quarter (through the end of November) and underperformed the market. If you are interested in investing in large cap stocks with huge upside potential, you should check out the top 20 most popular stocks among hedge funds as many of these stocks already outperformed the market so far this year.