“Market conditions are changing. The continued rise in interest rates suggests we are in the early stages of a bond bear market, which could intensify as central banks withdraw liquidity. The receding tide of liquidity will start to reveal more rocks beyond what has been exposed in emerging markets so far, and the value of a value discipline will be in avoiding the biggest capital-destroying rocks. If a rock emerges on the crowded shore of U.S. momentum, it could result in a major liquidity challenge, as momentum is often most intense on the downside as a crowded trade reverses. So investors are facing a large potential trade-off right now: continue to bet on the current dominance of momentum and the S&P 500, or bet on change and take an active value bet in names with attractive value and optionality, but with negative momentum,” said Clearbridge Investments in its market commentary. We aren’t sure whether long-term interest rates will top 5% and value stocks outperform growth, but we follow hedge fund investor letters to understand where the markets and stocks might be going. This article will lay out and discuss the hedge fund and institutional investor sentiment towards Skyline Champion Corporation (NYSE:SKY).

Skyline Champion Corporation (NYSE:SKY) shares haven’t seen a lot of action during the third quarter. Overall, hedge fund sentiment was unchanged. The stock was in 23 hedge funds’ portfolios at the end of December. At the end of this article we will also compare SKY to other stocks including Rambus Inc. (NASDAQ:RMBS), New York Mortgage Trust, Inc. (NASDAQ:NYMT), and NIC Inc. (NASDAQ:EGOV) to get a better sense of its popularity.

In the eyes of most investors, hedge funds are seen as unimportant, old financial tools of years past. While there are more than 8000 funds in operation at the moment, We choose to focus on the elite of this group, around 750 funds. These investment experts oversee the majority of the smart money’s total asset base, and by shadowing their matchless picks, Insider Monkey has come up with a few investment strategies that have historically outrun the broader indices. Insider Monkey’s flagship hedge fund strategy outstripped the S&P 500 index by nearly 5 percentage points per annum since its inception in May 2014 through early November 2018. We were able to generate large returns even by identifying short candidates. Our portfolio of short stocks lost 27.5% since February 2017 (through March 12th) even though the market was up nearly 25% during the same period. We just shared a list of 6 short targets in our latest quarterly update and they are already down an average of 6% in less than a month.

How have hedgies been trading Skyline Champion Corporation (NYSE:SKY)? 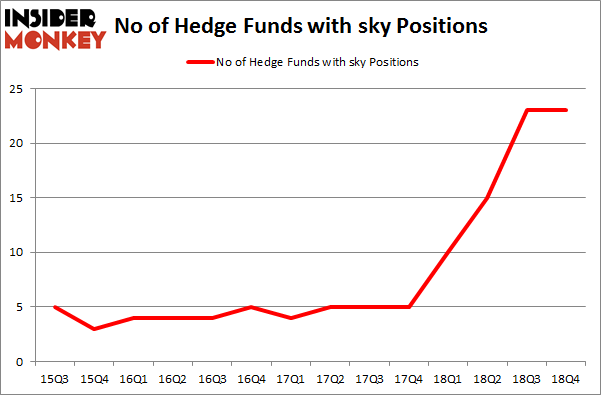 According to Insider Monkey’s hedge fund database, MAK Capital One, managed by Michael Kaufman, holds the number one position in Skyline Champion Corporation (NYSE:SKY). MAK Capital One has a $81.4 million position in the stock, comprising 44.1% of its 13F portfolio. The second largest stake is held by Mark T. Gallogly of Centerbridge Partners, with a $66.3 million position; 6.7% of its 13F portfolio is allocated to the company. Some other members of the smart money that hold long positions comprise Jeffrey Gendell’s Tontine Asset Management, Jonathan Barrett and Paul Segal’s Luminus Management and Benjamin A. Smith’s Laurion Capital Management.

Judging by the fact that Skyline Champion Corporation (NYSE:SKY) has experienced falling interest from hedge fund managers, it’s safe to say that there was a specific group of money managers who sold off their full holdings in the third quarter. At the top of the heap, Ira Unschuld’s Brant Point Investment Management said goodbye to the biggest position of all the hedgies watched by Insider Monkey, totaling about $7.8 million in stock. Mark Broach’s fund, Manatuck Hill Partners, also dropped its stock, about $7.8 million worth. These transactions are important to note, as total hedge fund interest stayed the same (this is a bearish signal in our experience).

As you can see these stocks had an average of 16 hedge funds with bullish positions and the average amount invested in these stocks was $75 million. That figure was $233 million in SKY’s case. InVitae Corporation (NYSE:NVTA) is the most popular stock in this table. On the other hand New York Mortgage Trust, Inc. (NASDAQ:NYMT) is the least popular one with only 9 bullish hedge fund positions. Skyline Champion Corporation (NYSE:SKY) is not the most popular stock in this group but hedge fund interest is still above average. Our calculations showed that top 15 most popular stocks) among hedge funds returned 24.2% through April 22nd and outperformed the S&P 500 ETF (SPY) by more than 7 percentage points. Hedge funds were also right about betting on SKY as the stock returned 35% and outperformed the market by an even larger margin. Hedge funds were rewarded for their relative bullishness.