Is Morgan Stanley (NYSE:MS) a good equity to bet on right now? We like to check what the smart money thinks first before doing extensive research on a given stock. Although there have been several high profile failed hedge fund picks, the consensus picks among hedge fund investors have historically outperformed the market after adjusting for known risk attributes. It’s not surprising given that hedge funds have access to better information and more resources to predict the winners in the stock market.

Morgan Stanley (NYSE:MS) was in 60 hedge funds’ portfolios at the end of June. MS shareholders have witnessed an increase in activity from the world’s largest hedge funds of late. There were 54 hedge funds in our database with MS positions at the end of the previous quarter. Our calculations also showed that MS isn’t among the 30 most popular stocks among hedge funds (see the video at the end of this article).

In the 21st century investor’s toolkit there are a multitude of indicators shareholders employ to assess their stock investments. A pair of the most under-the-radar indicators are hedge fund and insider trading indicators. Our researchers have shown that, historically, those who follow the best picks of the top hedge fund managers can outclass the S&P 500 by a superb amount (see the details here).

Unlike some fund managers who are betting on Dow reaching 40000 in a year, our long-short investment strategy doesn’t rely on bull markets to deliver double digit returns. We only rely on hedge fund buy/sell signals. We’re going to check out the new hedge fund action encompassing Morgan Stanley (NYSE:MS).

At the end of the second quarter, a total of 60 of the hedge funds tracked by Insider Monkey held long positions in this stock, a change of 11% from the previous quarter. The graph below displays the number of hedge funds with bullish position in MS over the last 16 quarters. With hedgies’ positions undergoing their usual ebb and flow, there exists an “upper tier” of key hedge fund managers who were upping their holdings meaningfully (or already accumulated large positions). 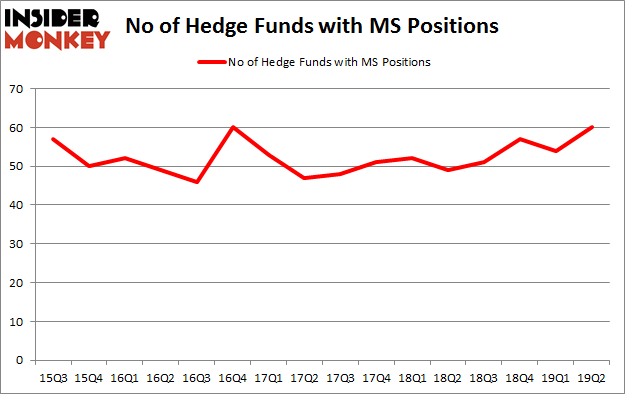 When looking at the institutional investors followed by Insider Monkey, Jeffrey Ubben’s ValueAct Capital has the most valuable position in Morgan Stanley (NYSE:MS), worth close to $1.1491 billion, comprising 12% of its total 13F portfolio. The second largest stake is held by Eagle Capital Management, led by Boykin Curry, holding a $675.2 million position; the fund has 2.4% of its 13F portfolio invested in the stock. Some other members of the smart money that hold long positions encompass Richard S. Pzena’s Pzena Investment Management, Ric Dillon’s Diamond Hill Capital and Peter Rathjens, Bruce Clarke and John Campbell’s Arrowstreet Capital.

As you can see these stocks had an average of 34.25 hedge funds with bullish positions and the average amount invested in these stocks was $1493 million. That figure was $4267 million in MS’s case. Anthem Inc (NYSE:ANTM) is the most popular stock in this table. On the other hand China Life Insurance Company Limited (NYSE:LFC) is the least popular one with only 8 bullish hedge fund positions. Morgan Stanley (NYSE:MS) is not the most popular stock in this group but hedge fund interest is still above average. This is a slightly positive signal but we’d rather spend our time researching stocks that hedge funds are piling on. Our calculations showed that top 20 most popular stocks among hedge funds returned 24.4% in 2019 through September 30th and outperformed the S&P 500 ETF (SPY) by 4 percentage points. Unfortunately MS wasn’t nearly as popular as these 20 stocks and hedge funds that were betting on MS were disappointed as the stock returned -1.8% during the third quarter and underperformed the market. If you are interested in investing in large cap stocks with huge upside potential, you should check out the top 20 most popular stocks among hedge funds as many of these stocks already outperformed the market so far this year.