The latest 13F reporting period has come and gone, and Insider Monkey is again at the forefront when it comes to making use of this gold mine of data. We have processed the filings of the more than 700 world-class investment firms that we track and now have access to the collective wisdom contained in these filings, which are based on their June 28 holdings, data that is available nowhere else. Should you consider Markel Corporation (NYSE:MKL) for your portfolio? We’ll look to this invaluable collective wisdom for the answer.

Markel Corporation (NYSE:MKL) has experienced an increase in support from the world’s most elite money managers of late. MKL was in 25 hedge funds’ portfolios at the end of the second quarter of 2019. There were 23 hedge funds in our database with MKL holdings at the end of the previous quarter. Our calculations also showed that MKL isn’t among the 30 most popular stocks among hedge funds.

Unlike some fund managers who are betting on Dow reaching 40000 in a year, our long-short investment strategy doesn’t rely on bull markets to deliver double digit returns. We only rely on hedge fund buy/sell signals. We’re going to take a look at the fresh hedge fund action encompassing Markel Corporation (NYSE:MKL).

What does smart money think about Markel Corporation (NYSE:MKL)?

At Q2’s end, a total of 25 of the hedge funds tracked by Insider Monkey were bullish on this stock, a change of 9% from the previous quarter. The graph below displays the number of hedge funds with bullish position in MKL over the last 16 quarters. With hedge funds’ capital changing hands, there exists a few key hedge fund managers who were boosting their holdings substantially (or already accumulated large positions). 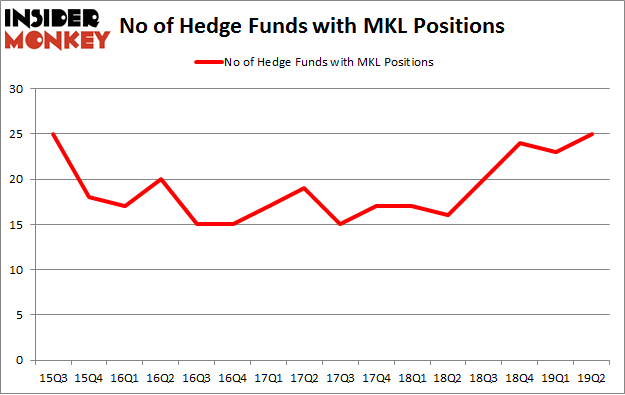 The largest stake in Markel Corporation (NYSE:MKL) was held by Akre Capital Management, which reported holding $559 million worth of stock at the end of March. It was followed by Renaissance Technologies with a $235.8 million position. Other investors bullish on the company included Polar Capital, Balyasny Asset Management, and Citadel Investment Group.

As industrywide interest jumped, specific money managers were leading the bulls’ herd. Gotham Asset Management, managed by Joel Greenblatt, initiated the largest position in Markel Corporation (NYSE:MKL). Gotham Asset Management had $0.3 million invested in the company at the end of the quarter. Brandon Haley’s Holocene Advisors also made a $0.2 million investment in the stock during the quarter. The only other fund with a new position in the stock is Claes Fornell’s CSat Investment Advisory.

As you can see these stocks had an average of 17.25 hedge funds with bullish positions and the average amount invested in these stocks was $468 million. That figure was $1300 million in MKL’s case. Teleflex Incorporated (NYSE:TFX) is the most popular stock in this table. On the other hand Sasol Limited (NYSE:SSL) is the least popular one with only 8 bullish hedge fund positions. Markel Corporation (NYSE:MKL) is not the most popular stock in this group but hedge fund interest is still above average. Our calculations showed that top 20 most popular stocks  (view the video below) among hedge funds returned 24.4% in 2019 through September 30th and outperformed the S&P 500 ETF (SPY) by 4 percentage points. Hedge funds were also right about betting on MKL as the stock returned 8.5% during the third quarter and outperformed the market. Hedge funds were rewarded for their relative bullishness.