Frank’s International NV (NYSE:FI) investors should pay attention to an increase in hedge fund interest recently. FI was in 15 hedge funds’ portfolios at the end of the second quarter of 2019. There were 12 hedge funds in our database with FI holdings at the end of the previous quarter. Our calculations also showed that FI isn’t among the 30 most popular stocks among hedge funds (see the video below).

At the moment there are a large number of indicators investors employ to evaluate stocks. A pair of the most under-the-radar indicators are hedge fund and insider trading sentiment. We have shown that, historically, those who follow the best picks of the elite fund managers can outclass the broader indices by a healthy margin (see the details here).

Heading into the third quarter of 2019, a total of 15 of the hedge funds tracked by Insider Monkey were bullish on this stock, a change of 25% from the previous quarter. By comparison, 5 hedge funds held shares or bullish call options in FI a year ago. With hedgies’ capital changing hands, there exists a select group of notable hedge fund managers who were boosting their holdings considerably (or already accumulated large positions). 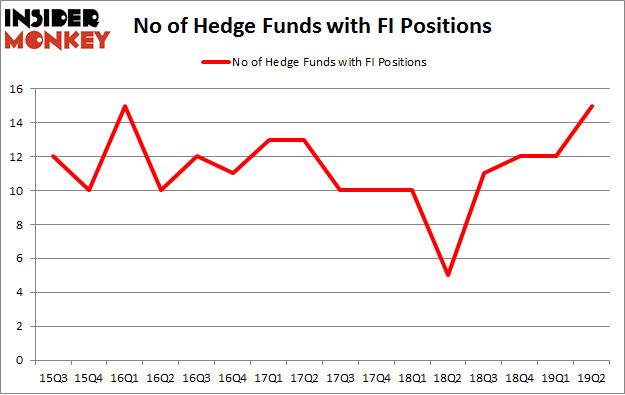 As aggregate interest increased, key money managers were breaking ground themselves. Balyasny Asset Management, managed by Dmitry Balyasny, established the most outsized position in Frank’s International NV (NYSE:FI). Balyasny Asset Management had $3.9 million invested in the company at the end of the quarter. Josh Donfeld and David Rogers’s Castle Hook Partners also made a $0.9 million investment in the stock during the quarter. The following funds were also among the new FI investors: Simon Sadler’s Segantii Capital, Dan Loeb’s Third Point, and Minhua Zhang’s Weld Capital Management.

As you can see these stocks had an average of 13 hedge funds with bullish positions and the average amount invested in these stocks was $82 million. That figure was $27 million in FI’s case. Denny’s Corporation (NASDAQ:DENN) is the most popular stock in this table. On the other hand City Holding Company (NASDAQ:CHCO) is the least popular one with only 11 bullish hedge fund positions. Frank’s International NV (NYSE:FI) is not the most popular stock in this group but hedge fund interest is still above average. This is a slightly positive signal but we’d rather spend our time researching stocks that hedge funds are piling on. Our calculations showed that top 20 most popular stocks among hedge funds returned 24.4% in 2019 through September 30th and outperformed the S&P 500 ETF (SPY) by 4 percentage points. Unfortunately FI wasn’t nearly as popular as these 20 stocks and hedge funds that were betting on FI were disappointed as the stock returned -13% during the third quarter and underperformed the market. If you are interested in investing in large cap stocks with huge upside potential, you should check out the top 20 most popular stocks among hedge funds as many of these stocks already outperformed the market so far this year.