The fourth quarter was a rough one for most investors, as fears of a rising interest rate environment in the U.S, a trade war with China, and a more or less stagnant Europe, weighed heavily on the minds of investors. Both the S&P 500 and Russell 2000 sank as a result, with the Russell 2000, which is composed of smaller companies, being hit especially hard. This was primarily due to hedge funds, which are big supporters of small-cap stocks, pulling some of their capital out of the volatile markets during this time. Let’s look at how this market volatility affected the sentiment of hedge funds towards Ebix Inc (NASDAQ:EBIX), and what that likely means for the prospects of the company and its stock.

Is Ebix Inc (NASDAQ:EBIX) a great investment right now? The smart money is becoming more confident. The number of bullish hedge fund bets improved by 2 lately. Our calculations also showed that EBIX isn’t among the 30 most popular stocks among hedge funds. EBIX was in 18 hedge funds’ portfolios at the end of the fourth quarter of 2018. There were 16 hedge funds in our database with EBIX positions at the end of the previous quarter.

In the eyes of most stock holders, hedge funds are viewed as slow, old financial vehicles of the past. While there are more than 8000 funds with their doors open today, Our experts hone in on the masters of this group, approximately 750 funds. Most estimates calculate that this group of people watch over bulk of the smart money’s total asset base, and by paying attention to their unrivaled equity investments, Insider Monkey has found numerous investment strategies that have historically outpaced the S&P 500 index. Insider Monkey’s flagship hedge fund strategy defeated the S&P 500 index by nearly 5 percentage points a year since its inception in May 2014 through early November 2018. We were able to generate large returns even by identifying short candidates. Our portfolio of short stocks lost 27.5% since February 2017 (through March 12th) even though the market was up nearly 25% during the same period. We just shared a list of 6 short targets in our latest quarterly update and they are already down an average of 6% in less than a month.

Heading into the first quarter of 2019, a total of 18 of the hedge funds tracked by Insider Monkey were long this stock, a change of 13% from the previous quarter. The graph below displays the number of hedge funds with bullish position in EBIX over the last 14 quarters. With the smart money’s capital changing hands, there exists a few key hedge fund managers who were boosting their holdings significantly (or already accumulated large positions). 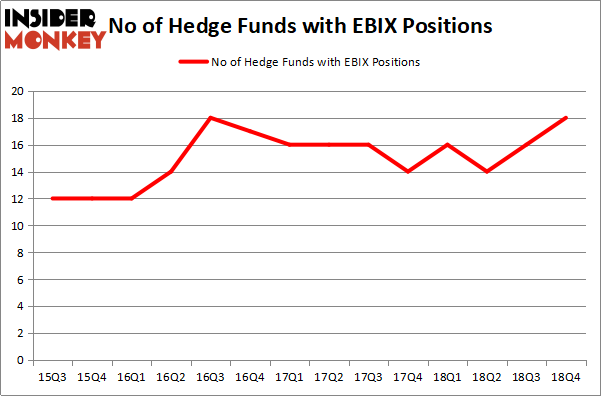 More specifically, P2 Capital Partners was the largest shareholder of Ebix Inc (NASDAQ:EBIX), with a stake worth $48.7 million reported as of the end of December. Trailing P2 Capital Partners was Marshall Wace LLP, which amassed a stake valued at $31.6 million. Millennium Management, Cadian Capital, and Barington Capital Group were also very fond of the stock, giving the stock large weights in their portfolios.

Now, some big names have been driving this bullishness. Cadian Capital, managed by Eric Bannasch, initiated the most valuable position in Ebix Inc (NASDAQ:EBIX). Cadian Capital had $7.6 million invested in the company at the end of the quarter. Ernest Chow and Jonathan Howe’s Sensato Capital Management also initiated a $1.8 million position during the quarter. The other funds with brand new EBIX positions are Roger Ibbotson’s Zebra Capital Management, Michael Platt and William Reeves’s BlueCrest Capital Mgmt., and Benjamin A. Smith’s Laurion Capital Management.