Many investors, including Paul Tudor Jones or Stan Druckenmiller, have been saying before the Q4 market crash that the stock market is overvalued due to a low interest rate environment that leads to companies swapping their equity for debt and focusing mostly on short-term performance such as beating the quarterly earnings estimates. In the first half of 2019, most investors recovered all of their Q4 losses as sentiment shifted and optimism dominated the US China trade negotiations. Nevertheless, many of the stocks that delivered strong returns in the first half still sport strong fundamentals and their gains were more related to the general market sentiment rather than their individual performance and hedge funds kept their bullish stance. In this article we will find out how hedge fund sentiment to Coherus Biosciences Inc (NASDAQ:CHRS) changed recently.

Coherus Biosciences Inc (NASDAQ:CHRS) shares haven’t seen a lot of action during the second quarter. Overall, hedge fund sentiment was unchanged. The stock was in 27 hedge funds’ portfolios at the end of June. The level and the change in hedge fund popularity aren’t the only variables you need to analyze to decipher hedge funds’ perspectives. A stock may witness a boost in popularity but it may still be less popular than similarly priced stocks. That’s why at the end of this article we will examine companies such as Studio City International Holdings Limited (NYSE:MSC), Whiting Petroleum Corporation (NYSE:WLL), and ForeScout Technologies, Inc. (NASDAQ:FSCT) to gather more data points. Our calculations also showed that CHRS isn’t among the 30 most popular stocks among hedge funds (see the video below). 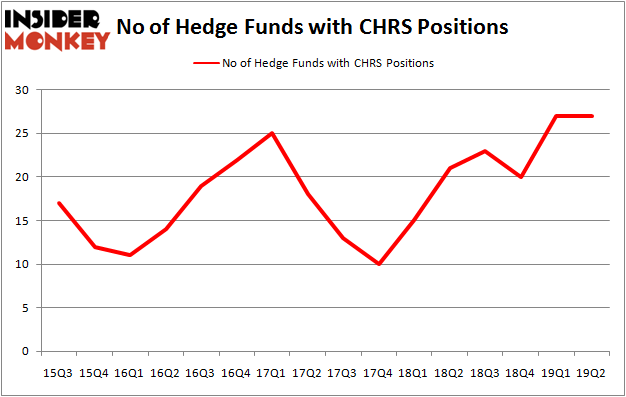 Unlike former hedge manager, Dr. Steve Sjuggerud, who is convinced Dow will soar past 40000, our long-short investment strategy doesn’t rely on bull markets to deliver double digit returns. We only rely on hedge fund buy/sell signals. We’re going to take a gander at the key hedge fund action regarding Coherus Biosciences Inc (NASDAQ:CHRS).

What have hedge funds been doing with Coherus Biosciences Inc (NASDAQ:CHRS)?

Among these funds, Rock Springs Capital Management held the most valuable stake in Coherus Biosciences Inc (NASDAQ:CHRS), which was worth $41.5 million at the end of the second quarter. On the second spot was Deerfield Management which amassed $37.1 million worth of shares. Moreover, Hound Partners, Partner Fund Management, and Adage Capital Management were also bullish on Coherus Biosciences Inc (NASDAQ:CHRS), allocating a large percentage of their portfolios to this stock.

Seeing as Coherus Biosciences Inc (NASDAQ:CHRS) has faced bearish sentiment from the entirety of the hedge funds we track, it’s safe to say that there is a sect of hedge funds that slashed their positions entirely by the end of the second quarter. At the top of the heap, Steve Cohen’s Point72 Asset Management sold off the biggest stake of the “upper crust” of funds tracked by Insider Monkey, valued at about $12.5 million in stock. Kamran Moghtaderi’s fund, Eversept Partners, also dumped its stock, about $1.6 million worth. These transactions are intriguing to say the least, as aggregate hedge fund interest stayed the same (this is a bearish signal in our experience).

As you can see these stocks had an average of 14.5 hedge funds with bullish positions and the average amount invested in these stocks was $202 million. That figure was $263 million in CHRS’s case. Whiting Petroleum Corporation (NYSE:WLL) is the most popular stock in this table. On the other hand Studio City International Holdings Limited (NYSE:MSC) is the least popular one with only 4 bullish hedge fund positions. Compared to these stocks Coherus Biosciences Inc (NASDAQ:CHRS) is more popular among hedge funds. Our calculations showed that top 20 most popular stocks among hedge funds returned 24.4% in 2019 through September 30th and outperformed the S&P 500 ETF (SPY) by 4 percentage points. Unfortunately CHRS wasn’t nearly as popular as these 20 stocks and hedge funds that were betting on CHRS were disappointed as the stock returned -8.3% during the third quarter and underperformed the market. If you are interested in investing in large cap stocks with huge upside potential, you should check out the top 20 most popular stocks among hedge funds as many of these stocks already outperformed the market in Q3.