Is City Holding Company (NASDAQ:CHCO) ready to rally soon? Money managers are in a bullish mood. The number of bullish hedge fund bets rose by 3 recently. Our calculations also showed that CHCO isn’t among the 30 most popular stocks among hedge funds (see the video below). CHCO was in 11 hedge funds’ portfolios at the end of June. There were 8 hedge funds in our database with CHCO positions at the end of the previous quarter.

How have hedgies been trading City Holding Company (NASDAQ:CHCO)?

At the end of the second quarter, a total of 11 of the hedge funds tracked by Insider Monkey held long positions in this stock, a change of 38% from the previous quarter. Below, you can check out the change in hedge fund sentiment towards CHCO over the last 16 quarters. With hedgies’ positions undergoing their usual ebb and flow, there exists an “upper tier” of noteworthy hedge fund managers who were adding to their holdings meaningfully (or already accumulated large positions). 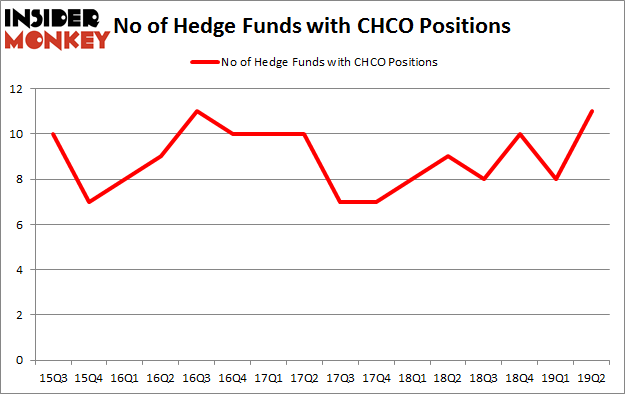 According to Insider Monkey’s hedge fund database, Chuck Royce’s Royce & Associates has the number one position in City Holding Company (NASDAQ:CHCO), worth close to $12.9 million, comprising 0.1% of its total 13F portfolio. Coming in second is Citadel Investment Group, managed by Ken Griffin, which holds a $1.5 million position; less than 0.1%% of its 13F portfolio is allocated to the company. Other members of the smart money with similar optimism comprise Renaissance Technologies, Paul Tudor Jones’s Tudor Investment Corp and Cliff Asness’s AQR Capital Management.

With a general bullishness amongst the heavyweights, key hedge funds have been driving this bullishness. Tudor Investment Corp, managed by Paul Tudor Jones, assembled the most outsized position in City Holding Company (NASDAQ:CHCO). Tudor Investment Corp had $0.7 million invested in the company at the end of the quarter. Israel Englander’s Millennium Management also made a $0.4 million investment in the stock during the quarter. The only other fund with a brand new CHCO position is Benjamin A. Smith’s Laurion Capital Management.

As you can see these stocks had an average of 15.25 hedge funds with bullish positions and the average amount invested in these stocks was $176 million. That figure was $19 million in CHCO’s case. Waddell & Reed Financial, Inc. (NYSE:WDR) is the most popular stock in this table. On the other hand Eidos Therapeutics, Inc. (NASDAQ:EIDX) is the least popular one with only 11 bullish hedge fund positions. Compared to these stocks City Holding Company (NASDAQ:CHCO) is even less popular than EIDX. Hedge funds dodged a bullet by taking a bearish stance towards CHCO. Our calculations showed that the top 20 most popular hedge fund stocks returned 24.4% in 2019 through September 30th and outperformed the S&P 500 ETF (SPY) by 4 percentage points. Unfortunately CHCO wasn’t nearly as popular as these 20 stocks (hedge fund sentiment was very bearish); CHCO investors were disappointed as the stock returned 0.7% during the third quarter and underperformed the market. If you are interested in investing in large cap stocks with huge upside potential, you should check out the top 20 most popular stocks among hedge funds as many of these stocks already outperformed the market so far in 2019.