A whopping number of 13F filings filed with U.S. Securities and Exchange Commission has been processed by Insider Monkey so that individual investors can look at the overall hedge fund sentiment towards the stocks included in their watchlists. These freshly-submitted public filings disclose money managers’ equity positions as of the end of the three-month period that ended December 31, so let’s proceed with the discussion of the hedge fund sentiment on BrightSphere Investment Group plc (NYSE:BSIG).

Hedge fund interest in BrightSphere Investment Group plc (NYSE:BSIG) shares was flat at the end of last quarter. This is usually a negative indicator. The level and the change in hedge fund popularity aren’t the only variables you need to analyze to decipher hedge funds’ perspectives. A stock may witness a boost in popularity but it may still be less popular than similarly priced stocks. That’s why at the end of this article we will examine companies such as Monmouth R.E. Inv. Corp. (NYSE:MNR), Gulfport Energy Corporation (NASDAQ:GPOR), and PennyMac Mortgage Investment Trust (NYSE:PMT) to gather more data points.

What have hedge funds been doing with BrightSphere Investment Group plc (NYSE:BSIG)?

At the end of the fourth quarter, a total of 22 of the hedge funds tracked by Insider Monkey were bullish on this stock, a change of 0% from one quarter earlier. By comparison, 21 hedge funds held shares or bullish call options in BSIG a year ago. With the smart money’s sentiment swirling, there exists a few noteworthy hedge fund managers who were adding to their stakes significantly (or already accumulated large positions). 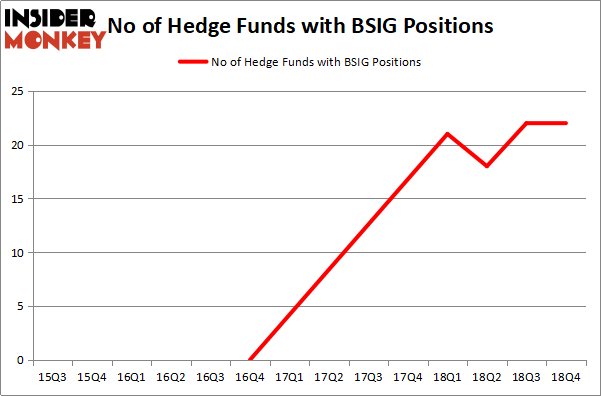 According to Insider Monkey’s hedge fund database, John Paulson’s Paulson & Co has the largest position in BrightSphere Investment Group plc (NYSE:BSIG), worth close to $55.6 million, corresponding to 1.3% of its total 13F portfolio. Coming in second is Mangrove Partners, led by Nathaniel August, holding a $19.7 million position; the fund has 2.6% of its 13F portfolio invested in the stock. Other peers that are bullish contain Ken Griffin’s Citadel Investment Group, Steve Cohen’s Point72 Asset Management and Israel Englander’s Millennium Management.

Because BrightSphere Investment Group plc (NYSE:BSIG) has experienced declining sentiment from hedge fund managers, it’s safe to say that there was a specific group of money managers that decided to sell off their positions entirely in the third quarter. Interestingly, Andrew Weiss’s Weiss Asset Management dumped the biggest position of all the hedgies monitored by Insider Monkey, totaling about $3.5 million in stock, and Malcolm Fairbairn’s Ascend Capital was right behind this move, as the fund said goodbye to about $1.5 million worth. These bearish behaviors are important to note, as aggregate hedge fund interest stayed the same (this is a bearish signal in our experience).

As you can see these stocks had an average of 12.75 hedge funds with bullish positions and the average amount invested in these stocks was $56 million. That figure was $138 million in BSIG’s case. Gulfport Energy Corporation (NASDAQ:GPOR) is the most popular stock in this table. On the other hand Monmouth R.E. Inv. Corp. (NYSE:MNR) is the least popular one with only 9 bullish hedge fund positions. BrightSphere Investment Group plc (NYSE:BSIG) is not the most popular stock in this group but hedge fund interest is still above average. Our calculations showed that top 15 most popular stocks) among hedge funds returned 24.2% through April 22nd and outperformed the S&P 500 ETF (SPY) by more than 7 percentage points. Hedge funds were also right about betting on BSIG as the stock returned 36.3% and outperformed the market by an even larger margin. Hedge funds were rewarded for their relative bullishness.