The government requires hedge funds and wealthy investors that crossed the $100 million equity holdings threshold are required to file a report that shows their positions at the end of every quarter. Even though it isn’t the intention, these filings level the playing field for ordinary investors. The latest round of 13F filings disclosed the funds’ positions on December 31. We at Insider Monkey have made an extensive database of nearly 750 of those elite funds and prominent investors’ filings. In this article, we analyze how these elite funds and prominent investors traded AtriCure Inc. (NASDAQ:ATRC) based on those filings.

We’re going to take a look at the latest hedge fund action regarding AtriCure Inc. (NASDAQ:ATRC).

What have hedge funds been doing with AtriCure Inc. (NASDAQ:ATRC)?

Heading into the first quarter of 2019, a total of 22 of the hedge funds tracked by Insider Monkey were long this stock, a change of 0% from the previous quarter. Below, you can check out the change in hedge fund sentiment towards ATRC over the last 14 quarters. So, let’s find out which hedge funds were among the top holders of the stock and which hedge funds were making big moves. 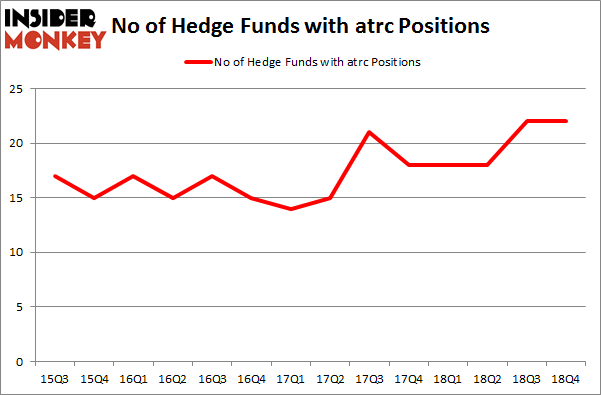 Due to the fact that AtriCure Inc. (NASDAQ:ATRC) has witnessed falling interest from the smart money, it’s safe to say that there is a sect of hedge funds who were dropping their entire stakes last quarter. At the top of the heap, Steve Cohen’s Point72 Asset Management sold off the largest stake of the “upper crust” of funds followed by Insider Monkey, valued at close to $6.1 million in stock. Matthew Hulsizer’s fund, PEAK6 Capital Management, also sold off its stock, about $0.6 million worth. These bearish behaviors are interesting, as aggregate hedge fund interest stayed the same (this is a bearish signal in our experience).