Is Arrowhead Pharmaceuticals, Inc. (NASDAQ:ARWR) a good equity to bet on right now? We like to check what the smart money thinks first before doing extensive research on a given stock. Although there have been several high profile failed hedge fund picks, the consensus picks among hedge fund investors have historically outperformed the market after adjusting for known risk attributes. It’s not surprising given that hedge funds have access to better information and more resources to predict the winners in the stock market.

Hedge fund interest in Arrowhead Pharmaceuticals, Inc. (NASDAQ:ARWR) shares was flat at the end of last quarter. This is usually a negative indicator. The level and the change in hedge fund popularity aren’t the only variables you need to analyze to decipher hedge funds’ perspectives. A stock may witness a boost in popularity but it may still be less popular than similarly priced stocks. That’s why at the end of this article we will examine companies such as Triton International Limited (NYSE:TRTN), Taubman Centers, Inc. (NYSE:TCO), and Xencor Inc (NASDAQ:XNCR) to gather more data points. Our calculations also showed that ARWR isn’t among the 30 most popular stocks among hedge funds (view the video below).

What have hedge funds been doing with Arrowhead Pharmaceuticals, Inc. (NASDAQ:ARWR)?

At the end of the second quarter, a total of 16 of the hedge funds tracked by Insider Monkey were bullish on this stock, a change of 0% from the previous quarter. The graph below displays the number of hedge funds with bullish position in ARWR over the last 16 quarters. With hedge funds’ positions undergoing their usual ebb and flow, there exists a select group of notable hedge fund managers who were boosting their holdings considerably (or already accumulated large positions). 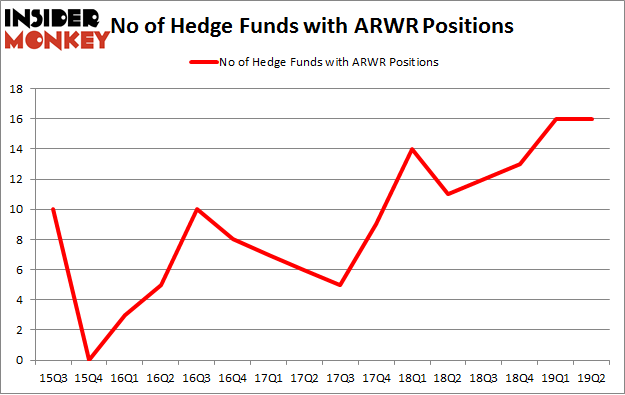 The largest stake in Arrowhead Pharmaceuticals, Inc. (NASDAQ:ARWR) was held by Vivo Capital, which reported holding $73.3 million worth of stock at the end of March. It was followed by Farallon Capital with a $53 million position. Other investors bullish on the company included Adage Capital Management, Renaissance Technologies, and Aquilo Capital Management.

Because Arrowhead Pharmaceuticals, Inc. (NASDAQ:ARWR) has witnessed bearish sentiment from the aggregate hedge fund industry, we can see that there exists a select few fund managers that elected to cut their positions entirely in the second quarter. Interestingly, Peter Rathjens, Bruce Clarke and John Campbell’s Arrowstreet Capital dropped the largest position of the “upper crust” of funds tracked by Insider Monkey, worth close to $4 million in stock, and Jeffrey Talpins’s Element Capital Management was right behind this move, as the fund dropped about $0.2 million worth. These transactions are intriguing to say the least, as total hedge fund interest stayed the same (this is a bearish signal in our experience).

As you can see these stocks had an average of 15.5 hedge funds with bullish positions and the average amount invested in these stocks was $181 million. That figure was $240 million in ARWR’s case. Taubman Centers, Inc. (NYSE:TCO) is the most popular stock in this table. On the other hand Meredith Corporation (NYSE:MDP) is the least popular one with only 11 bullish hedge fund positions. Arrowhead Pharmaceuticals, Inc. (NASDAQ:ARWR) is not the most popular stock in this group but hedge fund interest is still above average. Our calculations showed that top 20 most popular stocks among hedge funds returned 24.4% in 2019 through September 30th and outperformed the S&P 500 ETF (SPY) by 4 percentage points. Hedge funds were also right about betting on ARWR as the stock returned 6.3% during the third quarter and outperformed the market. Hedge funds were rewarded for their relative bullishness.