Looking for stocks with high upside potential? Just follow the big players within the hedge fund industry. Why should you do so? Let’s take a brief look at what statistics have to say about hedge funds’ stock picking abilities to illustrate. The Standard and Poor’s 500 Index returned approximately 20% in 2019 (through September 30th). Conversely, hedge funds’ 20 preferred S&P 500 stocks generated a return of 24% during the same period, with the majority of these stock picks outperforming the broader market benchmark. Coincidence? It might happen to be so, but it is unlikely. Our research covering the last 18 years indicates that hedge funds’ consensus stock picks generate superior risk-adjusted returns. That’s why we believe it is wise to check hedge fund activity before you invest your time or your savings on a stock like GTY Technology Holdings, Inc. (NASDAQ:GTYH).

GTY Technology Holdings, Inc. (NASDAQ:GTYH) has experienced a decrease in hedge fund interest recently. Our calculations also showed that GTYH isn’t among the 30 most popular stocks among hedge funds (see the video below).

In addition to following the biggest hedge funds for investment ideas, we also share stock pitches from conferences, investor letters and other sources  like this one where the fund manager is talking about two under the radar 1000% return potential stocks: first one in internet infrastructure and the second in the heart of advertising market. We use hedge fund buy/sell signals to determine whether to conduct in-depth analysis of these stock ideas which take days. Let’s take a peek at the new hedge fund action regarding GTY Technology Holdings, Inc. (NASDAQ:GTYH).

At the end of the second quarter, a total of 4 of the hedge funds tracked by Insider Monkey were bullish on this stock, a change of -56% from the previous quarter. The graph below displays the number of hedge funds with bullish position in GTYH over the last 16 quarters. With hedge funds’ sentiment swirling, there exists a select group of key hedge fund managers who were upping their holdings significantly (or already accumulated large positions). 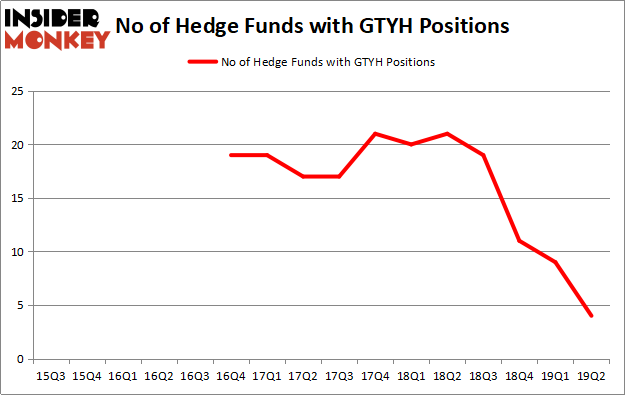 Of the funds tracked by Insider Monkey, Miller Value Partners, managed by Bill Miller, holds the most valuable position in GTY Technology Holdings, Inc. (NASDAQ:GTYH). Miller Value Partners has a $12.7 million position in the stock, comprising 0.5% of its 13F portfolio. On Miller Value Partners’s heels is Kingdon Capital, managed by Mark Kingdon, which holds a $8.2 million position; 0.8% of its 13F portfolio is allocated to the stock. Other peers that hold long positions include Anand Parekh’s Alyeska Investment Group, Israel Englander’s Millennium Management and John A. Levin’s Levin Capital Strategies.

Seeing as GTY Technology Holdings, Inc. (NASDAQ:GTYH) has witnessed falling interest from the smart money, logic holds that there lies a certain “tier” of funds that decided to sell off their full holdings in the second quarter. It’s worth mentioning that John M. Angelo and Michael L. Gordon’s Angelo Gordon & Co cut the biggest investment of the 750 funds followed by Insider Monkey, worth an estimated $10 million in stock. Seth Klarman’s fund, Baupost Group, also sold off its stock, about $0.9 million worth. These bearish behaviors are interesting, as total hedge fund interest fell by 5 funds in the second quarter.

Let’s go over hedge fund activity in other stocks – not necessarily in the same industry as GTY Technology Holdings, Inc. (NASDAQ:GTYH) but similarly valued. We will take a look at The Rubicon Project Inc (NYSE:RUBI), Unifi, Inc. (NYSE:UFI), Forterra, Inc. (NASDAQ:FRTA), and NVE Corporation (NASDAQ:NVEC). This group of stocks’ market valuations are closest to GTYH’s market valuation.

As you can see these stocks had an average of 11.5 hedge funds with bullish positions and the average amount invested in these stocks was $46 million. That figure was $23 million in GTYH’s case. The Rubicon Project Inc (NYSE:RUBI) is the most popular stock in this table. On the other hand NVE Corporation (NASDAQ:NVEC) is the least popular one with only 7 bullish hedge fund positions. Compared to these stocks GTY Technology Holdings, Inc. (NASDAQ:GTYH) is even less popular than NVEC. Hedge funds dodged a bullet by taking a bearish stance towards GTYH. Our calculations showed that the top 20 most popular hedge fund stocks returned 24.4% in 2019 through September 30th and outperformed the S&P 500 ETF (SPY) by 4 percentage points. Unfortunately GTYH wasn’t nearly as popular as these 20 stocks (hedge fund sentiment was very bearish); GTYH investors were disappointed as the stock returned -8.5% during the third quarter and underperformed the market. If you are interested in investing in large cap stocks with huge upside potential, you should check out the top 20 most popular stocks among hedge funds as many of these stocks already outperformed the market so far in 2019.