Investing in small cap stocks has historically been a way to outperform the market, as small cap companies typically grow faster on average than the blue chips. That outperformance comes with a price, however, as there are occasional periods of higher volatility. The time period since the end of the third quarter is one of those periods, as the Russell 2000 ETF (IWM) has underperformed the larger S&P 500 ETF (SPY) by about 4 percentage points. Given that the funds we track tend to have a disproportionate amount of their portfolios in smaller cap stocks, they have seen some volatility in their portfolios too. Actually their moves are potentially one of the factors that contributed to this volatility. In this article, we use our extensive database of hedge fund holdings to find out what the smart money thinks of Intel Corporation (NASDAQ:INTC).

Hedge funds surged into Intel Corporation (NASDAQ:INTC) during the second quarter, as the number of funds owning shares of the stock jumped by 22% to 62. It was also the third consecutive quarter that hedge fund ownership of Intel has increased. The monumental success of Fortnite has done wonders for gaming stocks this year, including Turtle Beach, shares of which have increased ninefold in 2018. Intel was also 10th on Billionaire Ken Fisher’s Top Stock Picks Heading Into 2019, as Fisher Investments owned 24.16 million shares. Fisher has owned Intel shares dating back to the dot-com bubble.

In the eyes of most investors, hedge funds are viewed as underperforming, outdated financial tools of the past. While there are more than 8,000 funds trading at present, we choose to focus on the leaders of this club, approximately 700 funds. Most estimates calculate that this group of people control the lion’s share of the hedge fund industry’s total asset base, and by tracking their finest investments, Insider Monkey has determined various investment strategies that have historically outrun the market. Insider Monkey’s small-cap hedge fund strategy outstripped the S&P 500 index by 12 percentage points per year for a decade in their back tests (see the details here).

What does the smart money think about Intel Corporation (NASDAQ:INTC)?

At the end of the third quarter, a total of 62 of the hedge funds tracked by Insider Monkey held long positions in this stock, a 22% surge from one quarter earlier. On the other hand, there were a total of 54 hedge funds with a bullish position in INTC in the middle of 2017. With hedge funds’ sentiment swirling, there exists an “upper tier” of noteworthy hedge fund managers who were increasing their stakes significantly (or already accumulated large positions). 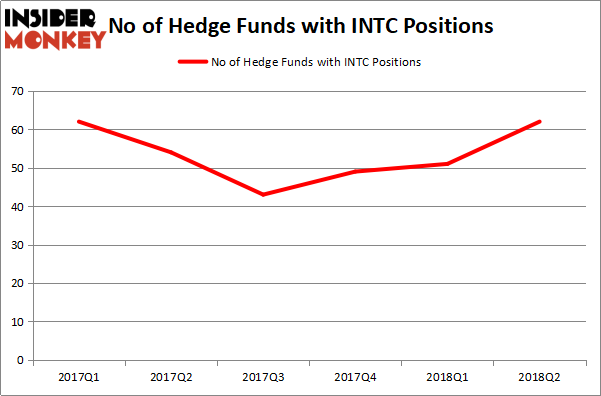 As you can see these stocks had an average of 59 hedge funds with bullish positions and the average amount invested in these stocks was $4.62 billion. That figure was $4.57 billion in INTC’s case. Mastercard Inc (NYSE:MA) is the most popular stock in this table. On the other hand Pfizer Inc. (NYSE:PFE) is the least popular one with only 48 bullish hedge fund positions. Intel Corporation (NASDAQ:INTC) is not the most popular stock in this group but hedge fund interest is still above average, though falling. This is a slightly positive signal but we’d rather spend our time researching stocks that hedge funds are piling on. In this regard MA might be a better candidate to consider a long position.