Hedge Funds Got Back Into PagSeguro Digital Ltd. (PAGS) Too Early

Hedge Funds and other institutional investors have just completed filing their 13Fs with the Securities and Exchange Commission, revealing their equity portfolios as of the end of June. At Insider Monkey, we follow nearly 750 active hedge funds and notable investors and by analyzing their 13F filings, we can determine the stocks that they are collectively bullish on. One of their picks is PagSeguro Digital Ltd. (NYSE:PAGS), so let’s take a closer look at the sentiment that surrounds it in the current quarter.

Is PagSeguro Digital Ltd. (NYSE:PAGS) a great investment right now? The smart money is taking a bullish view. The number of long hedge fund positions inched up by 5 recently. Our calculations also showed that PAGS isn’t among the 30 most popular stocks among hedge funds (click for Q3 rankings and see the video below for Q2 rankings).

Unlike the largest US hedge funds that are convinced Dow will soar past 40,000 or the world’s most bearish hedge fund that’s more convinced than ever that a crash is coming, our long-short investment strategy doesn’t rely on bull or bear markets to deliver double digit returns. We only rely on the best performing hedge funds‘ buy/sell signals. Let’s go over the fresh hedge fund action encompassing PagSeguro Digital Ltd. (NYSE:PAGS). 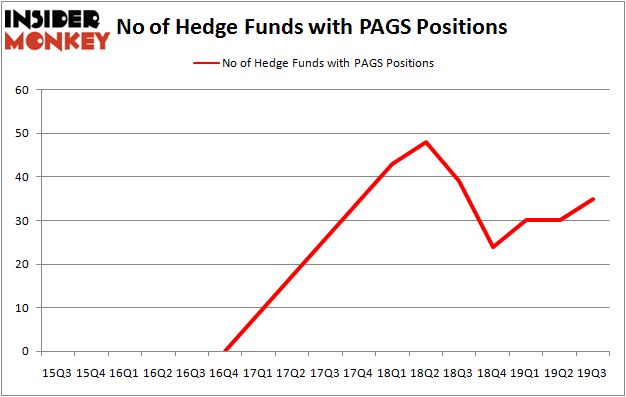 As one would reasonably expect, key money managers have been driving this bullishness. Polar Capital, managed by Brian Ashford-Russell and Tim Woolley, established the biggest position in PagSeguro Digital Ltd. (NYSE:PAGS). Polar Capital had $33 million invested in the company at the end of the quarter. Josh Donfeld and David Rogers’s Castle Hook Partners also made a $28.8 million investment in the stock during the quarter. The other funds with new positions in the stock are Peter Rathjens, Bruce Clarke and John Campbell’s Arrowstreet Capital, Bijan Modanlou, Joseph Bou-Saba, and Jayaveera Kodali’s Alta Park Capital, and Pasco Alfaro / Richard Tumure’s Miura Global Management.

As you can see these stocks had an average of 26.5 hedge funds with bullish positions and the average amount invested in these stocks was $958 million. That figure was $1381 million in PAGS’s case. CBS Corporation (NYSE:CBS) is the most popular stock in this table. On the other hand Magellan Midstream Partners, L.P. (NYSE:MMP) is the least popular one with only 12 bullish hedge fund positions. PagSeguro Digital Ltd. (NYSE:PAGS) is not the most popular stock in this group but hedge fund interest is still above average. This is a slightly positive signal but we’d rather spend our time researching stocks that hedge funds are piling on. Our calculations showed that top 20 most popular stocks among hedge funds returned 37.4% in 2019 through the end of November and outperformed the S&P 500 ETF (SPY) by 9.9 percentage points. Unfortunately PAGS wasn’t nearly as popular as these 20 stocks and hedge funds that were betting on PAGS were disappointed as the stock returned -26.7% during the fourth quarter (through the end of November) and underperformed the market. If you are interested in investing in large cap stocks with huge upside potential, you should check out the top 20 most popular stocks among hedge funds as many of these stocks already outperformed the market so far this year.