Coronavirus is probably the #1 concern in investors’ minds right now. It should be. On February 27th we published this article and predicted that US stocks will go down by at least 20% in the next 3-6 months. We also told you to short the market ETFs and buy long-term bonds. Investors who agreed with us and replicated these trades are up double digits whereas the market is down double digits. In these volatile markets we scrutinize hedge fund filings to get a reading on which direction each stock might be going. Hedge Funds and other institutional investors have just completed filing their 13Fs with the Securities and Exchange Commission, revealing their equity portfolios as of the end of June. At Insider Monkey, we follow nearly 835 active hedge funds and notable investors and by analyzing their 13F filings, we can determine the stocks that they are collectively bullish on. One of their picks is Walmart Inc. (NYSE:WMT), so let’s take a closer look at the sentiment that surrounds it in the current quarter.

Is Walmart Inc. (NYSE:WMT) undervalued? The best stock pickers are taking a pessimistic view. The number of bullish hedge fund bets were trimmed by 6 even before the coronavirus fears surfaced. Our calculations also showed that WMT isn’t among the 30 most popular stocks among hedge funds (click for Q4 rankings and see the video below for Q3 rankings). WMT was in 52 hedge funds’ portfolios at the end of the fourth quarter of 2019. There were 58 hedge funds in our database with WMT holdings at the end of the previous quarter.

We leave no stone unturned when looking for the next great investment idea. For example Europe is set to become the world’s largest cannabis market, so we check out this European marijuana stock pitch. We read hedge fund investor letters and listen to stock pitches at hedge fund conferences, and and go through short-term trade recommendations like this one. We even check out the recommendations of services with hard to believe track records. In January, we recommended a long position in one of the most shorted stocks in the market, and that stock returned more than 50% despite the large losses in the market since our recommendation. Now we’re going to take a look at the latest hedge fund action surrounding Walmart Inc. (NYSE:WMT).

What does smart money think about Walmart Inc. (NYSE:WMT)? 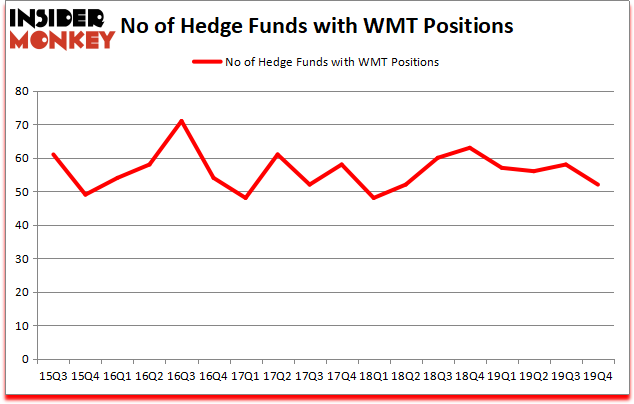 Among these funds, Bill & Melinda Gates Foundation Trust held the most valuable stake in Walmart Inc. (NYSE:WMT), which was worth $1378.9 million at the end of the third quarter. On the second spot was Fisher Asset Management which amassed $1309.9 million worth of shares. Renaissance Technologies, AQR Capital Management, and D E Shaw were also very fond of the stock, becoming one of the largest hedge fund holders of the company. In terms of the portfolio weights assigned to each position Pittencrieff Partners – Gabalex Capital allocated the biggest weight to Walmart Inc. (NYSE:WMT), around 7.01% of its 13F portfolio. Bill & Melinda Gates Foundation Trust is also relatively very bullish on the stock, designating 6.46 percent of its 13F equity portfolio to WMT.

We view hedge fund activity in the stock unfavorable, but in this case there was only a single hedge fund selling its entire position: 999. One hedge fund selling its entire position doesn’t always imply a bearish intent. Theoretically a hedge fund may decide to sell a promising position in order to invest the proceeds in a more promising idea. However, we don’t think this is the case in this case because only one of the 800+ hedge funds tracked by Insider Monkey identified as a viable investment and initiated a position in the stock (that fund was Samlyn Capital).

Let’s now review hedge fund activity in other stocks – not necessarily in the same industry as Walmart Inc. (NYSE:WMT) but similarly valued. We will take a look at Bank of America Corporation (NYSE:BAC), Berkshire Hathaway Inc. (NYSE:BRK-B), The Procter & Gamble Company (NYSE:PG), and Mastercard Incorporated (NYSE:MA). All of these stocks’ market caps are similar to WMT’s market cap.

As you can see these stocks had an average of 104 hedge funds with bullish positions and the average amount invested in these stocks was $21829 million. That figure was $5253 million in WMT’s case. Mastercard Incorporated (NYSE:MA) is the most popular stock in this table. On the other hand The Procter & Gamble Company (NYSE:PG) is the least popular one with only 79 bullish hedge fund positions. Compared to these stocks Walmart Inc. (NYSE:WMT) is even less popular than PG. Hedge funds clearly dropped the ball on WMT as the stock delivered strong returns, though hedge funds’ consensus picks still generated respectable returns. Our calculations showed that top 20 most popular stocks among hedge funds returned 41.3% in 2019 and outperformed the S&P 500 ETF (SPY) by 10.1 percentage points. These stocks also lost 12.9% in 2020 through March 9th but managed to beat the market by 1.9 percentage points. A small percentage of hedge funds were also right about betting on WMT as the stock returned -1.4% during the same time period and outperformed the market by an even larger margin.