Is Southern Copper Corporation (NYSE:SCCO) the right investment to pursue these days? Hedge funds are turning less bullish. The number of long hedge fund positions dropped by 2 in recent months. Our calculations also showed that SCCO isn’t among the 30 most popular stocks among hedge funds. SCCO was in 15 hedge funds’ portfolios at the end of December. There were 17 hedge funds in our database with SCCO holdings at the end of the previous quarter.

Today there are a large number of formulas investors use to analyze their stock investments. A couple of the less known formulas are hedge fund and insider trading interest. Our researchers have shown that, historically, those who follow the best picks of the best fund managers can beat their index-focused peers by a solid amount (see the details here). 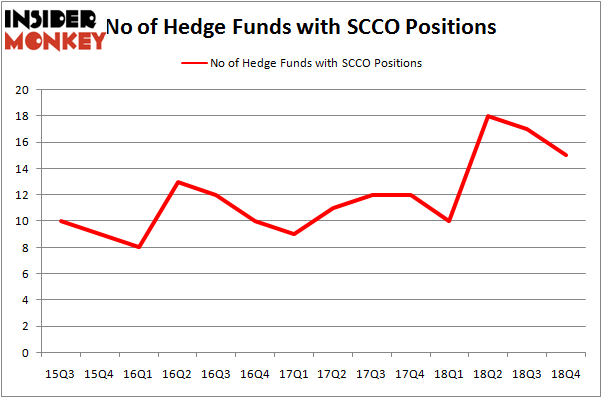 According to Insider Monkey’s hedge fund database, Ken Fisher’s Fisher Asset Management has the largest position in Southern Copper Corporation (NYSE:SCCO), worth close to $141.4 million, accounting for 0.2% of its total 13F portfolio. The second most bullish fund manager is Jim Simons of Renaissance Technologies, with a $22.8 million position; less than 0.1%% of its 13F portfolio is allocated to the stock. Other members of the smart money with similar optimism contain Israel Englander’s Millennium Management, Cliff Asness’s AQR Capital Management and Jacob Doft’s Highline Capital Management.

Because Southern Copper Corporation (NYSE:SCCO) has experienced a decline in interest from hedge fund managers, we can see that there was a specific group of hedgies who sold off their full holdings in the third quarter. It’s worth mentioning that Ken Heebner’s Capital Growth Management dropped the biggest stake of the “upper crust” of funds monitored by Insider Monkey, valued at about $40.8 million in stock, and Richard Driehaus’s Driehaus Capital was right behind this move, as the fund dumped about $6.2 million worth. These bearish behaviors are intriguing to say the least, as aggregate hedge fund interest dropped by 2 funds in the third quarter.

As you can see these stocks had an average of 34.5 hedge funds with bullish positions and the average amount invested in these stocks was $881 million. That figure was $231 million in SCCO’s case. Centene Corp (NYSE:CNC) is the most popular stock in this table. On the other hand Sprint Corporation (NYSE:S) is the least popular one with only 24 bullish hedge fund positions. Compared to these stocks Southern Copper Corporation (NYSE:SCCO) is even less popular than S. Fortunately hedge funds other large-cap picks performed well too. Our calculations showed that top 15 most popular stocks among hedge funds returned 19.7% through March 15th and outperformed the S&P 500 ETF (SPY) by 6.6 percentage points. Only a few hedge funds were also right about betting on SCCO as the stock returned 25.5% and outperformed the market as well.