Erie Indemnity Company (NASDAQ:ERIE) investors should pay attention to a decrease in activity from the world’s largest hedge funds of late. ERIE was in 11 hedge funds’ portfolios at the end of December. There were 14 hedge funds in our database with ERIE holdings at the end of the previous quarter. Our calculations also showed that ERIE isn’t among the 30 most popular stocks among hedge funds.

What have hedge funds been doing with Erie Indemnity Company (NASDAQ:ERIE)? 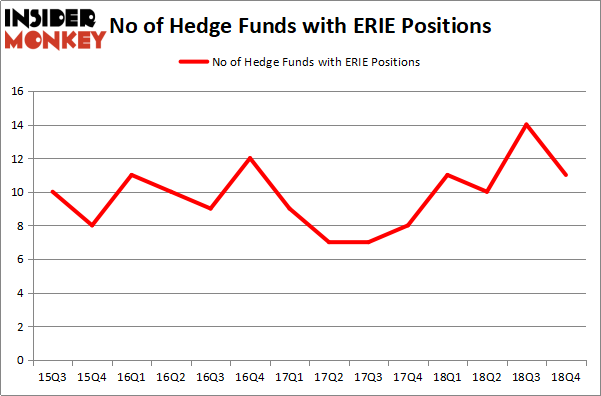 Among these funds, Royce & Associates held the most valuable stake in Erie Indemnity Company (NASDAQ:ERIE), which was worth $33.3 million at the end of the third quarter. On the second spot was Renaissance Technologies which amassed $24.1 million worth of shares. Moreover, Citadel Investment Group, AQR Capital Management, and D E Shaw were also bullish on Erie Indemnity Company (NASDAQ:ERIE), allocating a large percentage of their portfolios to this stock.

Seeing as Erie Indemnity Company (NASDAQ:ERIE) has experienced declining sentiment from the aggregate hedge fund industry, logic holds that there exists a select few hedge funds that elected to cut their positions entirely by the end of the third quarter. Intriguingly, Paul J. Isaac’s Arbiter Partners Capital Management dumped the largest stake of the 700 funds monitored by Insider Monkey, totaling close to $1.2 million in stock. Paul Marshall and Ian Wace’s fund, Marshall Wace LLP, also said goodbye to its stock, about $1.1 million worth. These moves are interesting, as total hedge fund interest fell by 3 funds by the end of the third quarter.

Let’s now take a look at hedge fund activity in other stocks – not necessarily in the same industry as Erie Indemnity Company (NASDAQ:ERIE) but similarly valued. We will take a look at GrubHub Inc (NYSE:GRUB), Graco Inc. (NYSE:GGG), Bio-Rad Laboratories, Inc. (NYSE:BIO), and ON Semiconductor Corporation (NASDAQ:ON). This group of stocks’ market valuations are closest to ERIE’s market valuation.

As you can see these stocks had an average of 26.25 hedge funds with bullish positions and the average amount invested in these stocks was $541 million. That figure was $71 million in ERIE’s case. Bio-Rad Laboratories, Inc. (NYSE:BIO) is the most popular stock in this table. On the other hand Graco Inc. (NYSE:GGG) is the least popular one with only 18 bullish hedge fund positions. Compared to these stocks Erie Indemnity Company (NASDAQ:ERIE) is even less popular than GGG. Hedge funds, except a few, dropped the ball on ERIE. Our calculations showed that top 15 most popular stocks among hedge funds returned 21.3% through April 8th and outperformed the S&P 500 ETF (SPY) by more than 5 percentage points. Only twelve hedge funds were also right about betting on ERIR as the stock returned 31.5% and outperformed the market as well. You can see the entire list of these shrewd hedge funds here.